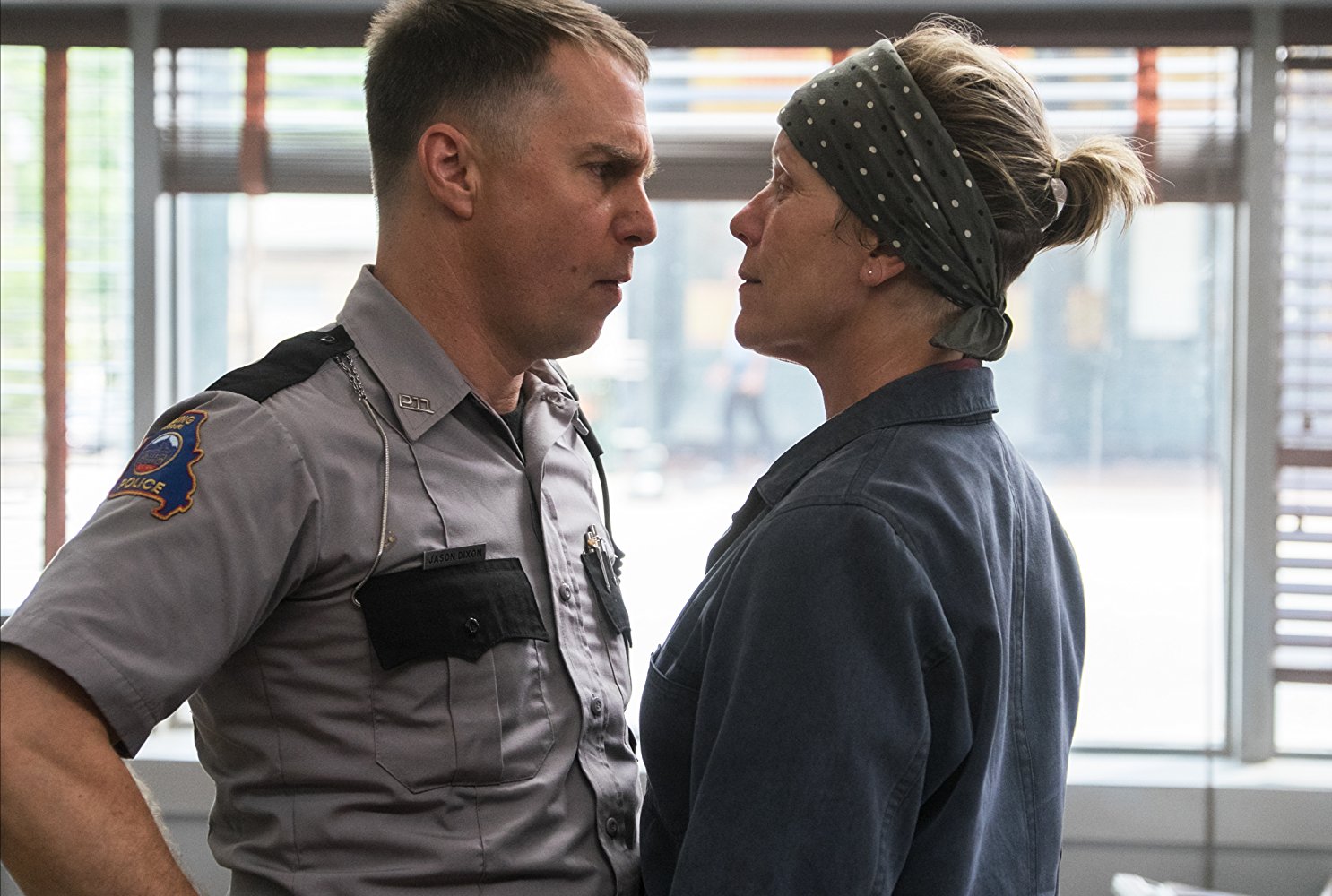 How often during this year’s barren movie scene have you been surprised? Hustle off to Three Billboards Outside Ebbing, Missouri for a fix. Martin McDonagh has created a movie that is made for the oddball talents of Frances McDormand and she embraces his script with abandon. It’s odd to suggest that you will laugh often and not be much bothered by the violence, but that’s true. Take a look.

The daughter of Mildred Hayes (Frances McDormand) has been raped and murdered and Ebbing’s local police department has not turned up a clue to the murderer in over a year. In her anger, Mildred rents three decrepit billboards on a seldom used highway entrance to the town for a month with an option to extend if she can raise the money. Papered with a bright red background, she paints enormous white letters. On #1: Still No Arrests. #2: How Come, Chief Willoughby? #3: Raped While Dying.

Mildred then visits the police department where all conversation is wrapped in profanity. Take that as the announcement that the rest of the movie will unfold in an odd mixture of accusations, comic moments, physical violence, and shifting alliances all delivered in obscenities.

We get to know Dixon (Sam Rockwell), second in command, who unfurls an odd character who keeps going home to his mother to refuel his brutal self for all other encounters. Woody Harrelson creates William Willoughby, the tough talking police chief who confesses to Mildred that he has cancer. His dying police chief is a grand portrait of a man who actually wants to find the truth but is wrapped in fear of dying and leaving his family. Even his search for the truth doesn’t derail Mildred’s foul mouthed verbal attack.

McDormand, looking the same in every scene with uncombed hair and jeans, lets us know with just a few atypical gestures that a human being lives within this angry woman. She creates a character like none we’ve ever seen on screen. When I promise that you’ll both laugh and shiver as she unleashes her rage, you won’t believe me until you watch that odd combination unfold violently in the hands of this unpredictable actor. She’s not just an original; she’s very good.

Other than the three billboards, there is little time spent on the town or its inhabitants. We meet just nine characters brought together by McDormand’s actions. As they destroy each other verbally and physically in that grim police station, the station itself becomes a stage for the eruption of the violence just resting in the minds of all the players.

By now you are probably deciding this one isn’t for you, but I urge you to go. If you think I’m crazy to recommend a movie saturated in fire and blood and guns and bad language, just go see for yourself what writer/director Martin McDonagh and Frances McDormand have done. And did I forget to tell you that you’ll laugh a lot?