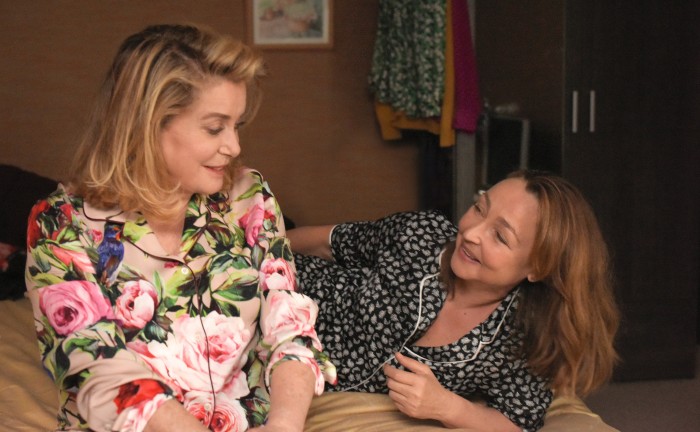 The Midwife opens with a series of births in the hands of solemn, accomplished Claire who is dedicated to her profession and to the clinic that is her workplace. Actor Catherine Frot learned the trade for this role in the interest of reality. Most countries have a protective time limit on filming newborns that means the new babies we have seen on film were usually more than three months old. This is the real deal.

In addition to introducing us to Claire in her profession, the long scene of live births suggests that each of these newborns will grow up to lead different lives in families that grow as they grow. This is how their lives began and the story of the family they become.

Within minutes we learn that outside of the clinic Claire lives a healthy, if reclusive life. She rides her bike to and from work, dislikes alcohol, grows and eats healthy vegetables in her backyard, and works at something she believes in deeply. The sad part for her is that her clinic is slated to be closed by a modern hospital.

Claire’s earnest world is pierced suddenly by an invitation from Beatrice (Catherine Deneuve) who was once mistress to Claire’s father and eventually left him. Would she meet for lunch? For Claire, that’s an invitation from Hell.

Beatrice left Caire’s father because she couldn’t stand the dullness of living in the country. And we soon learn why. “How come there’s no fun in your life?” she asks Claire, and answers her own question: “I believe in the power of pleasure.” And then, suddenly, we learn Beatrice has brain cancer and has come to her former lover’s daughter for help.

As the two of them begin to learn from each other’s wildly different selves, Claire slowly begins to open to a wider world by letting herself know Paul (Oliver Gourmet), the friendly neighbor she sees while they garden in the backyard. Beatrice gains strength from Claire’s new fidelity. This story would have paled in lesser hands.

Catherine Frot creates an earnest woman with deep integrity whose only love is her fine work of delivering babies. Catherine Deneuve’s Beatrice drinks, gambles, and thrives on the bustle of the city and uncertainty. She paints a vivid portrait of a woman devoted to risk, fun, and pleasure of all kinds.

This movie is the story of the unlikely journey toward friendship between a dying lover of life and a living lover of work. Each gives to the other while Beatrice opens Claire’s eyes to the possibility of Paul (Oliver Gourmet), the fine man who would make either woman happy for different reasons.

Martin Provost, wrote and directed the story and worked with the two grand actors to create a relationship that teaches each woman a lot about herself. It is the delicacy of their acting that is so remarkable here. They take us on that journey and they do it with rare grace.