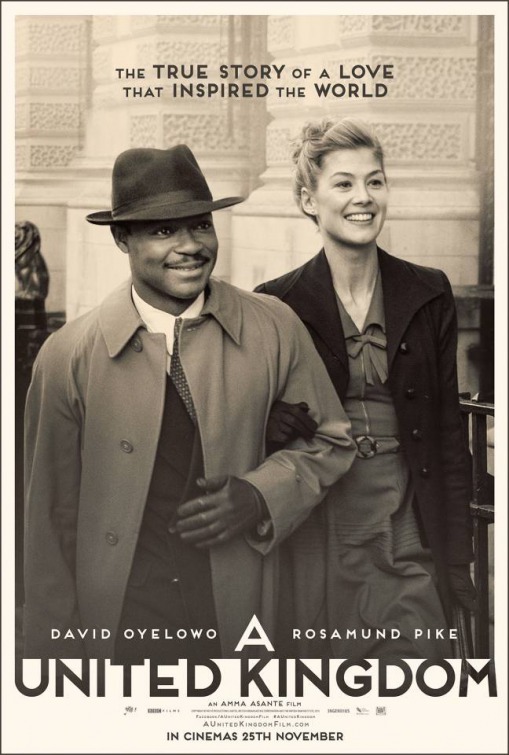 A United Kingdom is a powerful story rooted in racism in reverse. If the movie weren’t historically accurate, it might have been labelled “too good to be true,” but it did happen, and in just this way.

This fine movie was directed with great care and skill by director Amma Asante from a script by Guy Hibbert and a book by Susan Williams. Time, characters, and location may be different from those of today but the clash of cultural dictates – then and now – comes from the same hurt that racial hatred inflicts wherever it survives.

Time: 1947. Location: Africa and England. Characters: Seretse Khama (David Oyelowo) and Ruth Williams (Rosamund Pike). Seretse was sent from Africa to London by his uncle (Vusi Kunene) for the education that would equip him for his hereditary role as king of the British protectorate of Bechuanalanda, later to become Botswana. When the future king meets Ruth Williams, a white woman who works as an office worker, they fall in love with scant understanding of the international eruptions their marriage will cause. They love jazz, dancing, and each other and they spend little time thinking about the future.

When Seretse’s uncle (Vusi Kunene) summons him home with the announcement that his reign is to begin, the trouble begins. Ruth’s father rages at her marrying a black man and disowns her. Seretse’s uncle is livid that he is marrying a white woman. That’s the equation and while it plays out differently in England and Africa, the hurt is deep on both sides.

The genuinely appealing thing is that neither he nor she ever wavers. No second thoughts for her about marrying the king of a small African kingdom; none for him when his uncle exiles him back to England for five years as punishment for his white wife. Ruth elects to stay in Africa during her husband’s exile while she works for his return and in every way she can to become part of the country.

Actors Oyelowo and Pike create a couple we care very much about, and we marvel that their story unfolded seventy years ago. In a grim echo of today, the rage of the British government and their families creates the turmoil that nearly dooms his reign.

Director Amma Asante and actor David Oyelowo, both born in the U.K., clearly saw this true story in the same way: a married couple with love of country, love of each other, and a shared determination to bring this educated, qualified leader to the throne he had been preparing to occupy throughout his life.

The filmmakers were wise to avoid creating imaginary subplots and to concentrate instead on two people focused on their own future and that of the kingdom. This was 1947. In spite of progress between then and now, it is impossible to watch this movie without admitting to ourselves the one thing that persists in spite of political progress: the emotions of racial hatred.