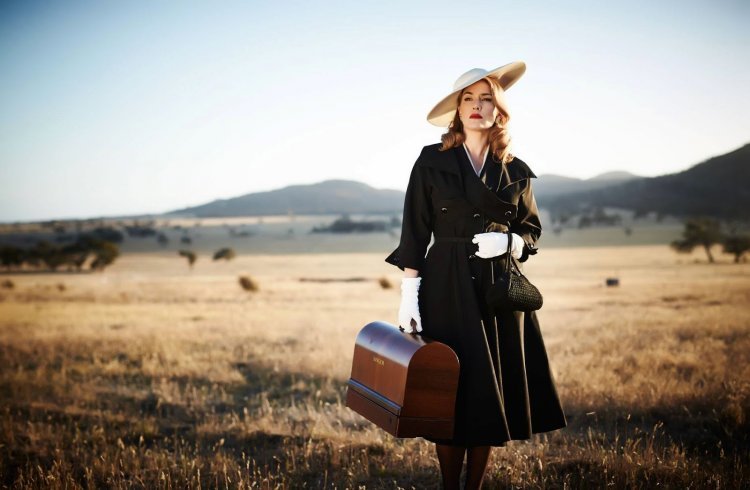 Get ready. Is The Dressmaker a black comedy, a fable, a folktale, or just plain camp? You decide. Consider the basic ingredients without descriptives. The place: Dungatar, Australia. The characters: Myrtle “Tilly” Dunnage (Kate Winslet), Tilly’s mother Mad Molly (Judy Davis), Tilly’s schoolteacher (Kerry Fox), Tilly’s paramour Teddy McSwiney (Liam Hemsworth). The premise: Tilly was run out of town years ago for killing a schoolmate and has returned for revenge.

Now let’s add the adjectives. Winslet’s Tilly returns to the grim, run down, backcountry town of Dungatar to find the answers to the question that has bedeviled her for her lifetime: “Did I do it?” Did she? Or was she blamed because she was the young kid who didn’t fit in?

As an accomplished designer and seamstress, Tilly sets up shop with her Singer sewing machine and transforms the local women while exploring the mystery of her past. Those Australian kids – now unappealing adults – express no regret for ruining Tilly’s life. Within minutes of the opening we realize we are watching a black comedy that intends to provoke our laughter and though it does occasionally, we laugh mostly because the movie is so contrived.

Audience efforts to figure things out are undercut by actors whose ages don’t match their roles – Kate Winslet, for example, falling for Liam Hemsworth the handsome young Prince Charming who quotes Macbeth. He is appealing but far too contemporary for this story that is set in the backcountry in1951. We are further confused by Tilly’s former teacher who is far too young to have taught her. The pairings among the characters make no sense at all – like a poker hand dealt without a matching pair. And only Winslet and Hemsworth seem real, if contemporary; the others are cardboard characters.

If we accept the story as black comedy, we can abandon our resentment, but finally sit there in quiet confusion. It’s hard even to sympathize with Tilly’s appetite for revenge against these odd people who never regret or apologize for who they are or what they did.

It would be fun to be able to say that Dungatar is a fanciful town of losers that acts as a comic backdrop for Winslet, but what’s funny about marital rape or the death of a child? This may well be the oddest role this fine actor has ever chosen.

The good parts? Judy Davis as Tilly’s hermit mother who lives in a dung heap of an old house. Hers is a sharp and unforgiving portrait of a mother from Hell. Hugo Weaving is funny as a cross dressing police sergeant reveling in the luxury of Tilly’s gorgeously colored sewing materials.

The takeaway? What was in the mind of novelist Rosalie Ham when she wrote the book and what persuaded Jocelyn Moorhouse to direct the movie? I add here that because the book was a great success, you might want to ignore my advice and find out for yourself.