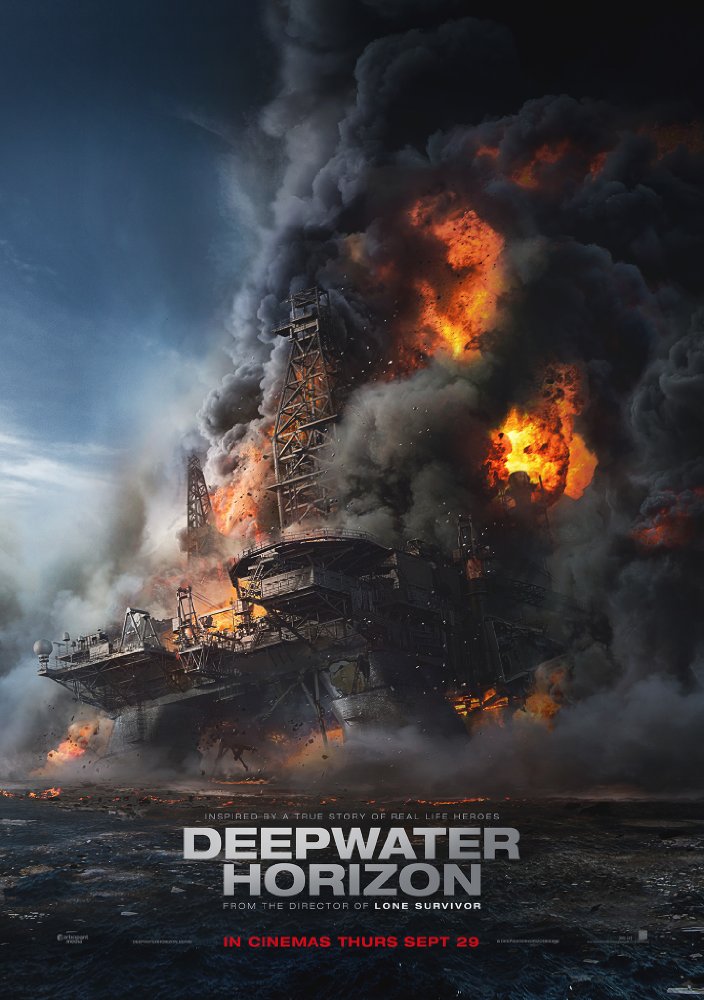 Deepwater Horizon hands us the unvarnished reality of the worst oil spill in U.S. history. Consider first what it doesn’t do. It resists the temptation of making a disaster film that swirls around victims and their families. The Hollywood rule of humanizing blockbusters with subplots is entirely ignored by director Peter Berg and the screenwriters. Taking even more of a risk, they leave most of the characters undeveloped in the shadow of the explosion. This is a movie about the horrifying reality of what led to the explosion of the oil rig four miles off the Louisiana coast in 2010.

The movie opens on Mike Williams (Mark Wahlberg), his wife Felicia ((Kate Hudson) and their daughter Sydney (Stella Allen) as Mike prepares to leave for three weeks of duty on the oil rig Deepwater Horizon which is 43 days behind schedule in its obligation to oil giant British Petroleum. In short order, Mike and the audience arrive at the largest movie set piece ever built. It is here that the filmmakers take their biggest risk. They concentrate not on personalities but on the culture of drilling for oil, on the flow and interconnection of the disparate parts on that rig.

To give us that culture, director Peter Berg, shows us short, sharp conversations among the 126 person crew. If much of the talk is unintelligible it matters not a whit because we begin to understand the exacting technical demands on each person trained to do just one thing. They yell at each other over the unrelenting noise in a kind of formal, practiced communication system.

By the time we grasp the culture of this mammoth oil rig, we know that the company is $50,000,000 over budget and that 300 flaws in the system are in need of repair. Enter Donald Vidrine, the BP representative created by John Malkovich in a characteristically quirky accent and manner. Vidrine is there to ensure that Mr. Jimmy’s work delivers on the overdue debt to BP.

By the time specialist Andrea Fleytas (Gina Rodriguez) calls “May Day” into the microphone, we have a good grasp of what happens when the oil backs up and the explosions rip through the rig. The expert use of special effects creates just what we saw on the news in 2010. Now we understand why.it happened. The lingering question: how is it possible that only eleven men died in that horrific explosion that triggered 87 days of 210 million gallons of oil burning on the water?

Against this background of fidelity to the truth of the tragedy, great credit goes to Mark Wahlberg and Kurt Russell for endowing their characters with restraint and quiet courage instead of melodrama. And then, a salute to Gina Rodriguez who creates a highly technical specialist, works and lives in a man’s culture and then is thrown into a burning sea of oil. She is terrific. Three powerful, quiet performances are rooted in the power of a true story.