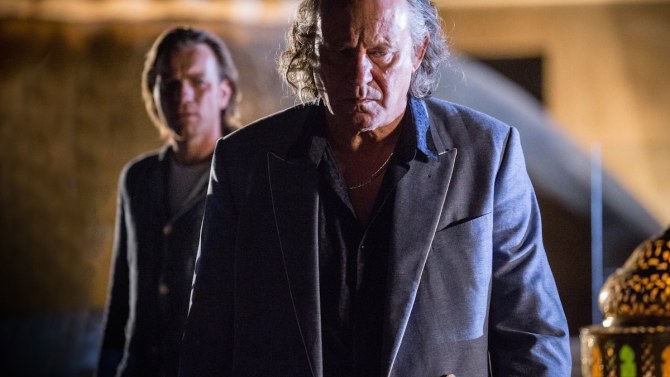 How can you miss when you build a movie on a novel by John LeCarre? Quite easily, it seems. Our Kind of Traitor starts out with some promising post-WWII ingredients: the Russian mafia, Britain’s MI6, and an unwitting courier. Spinning those elements into an effective spy thriller requires sharp direction and a knife-edged script. Unfortunately, this one falls instead into the well of mistakes common to Grade B spy stories.

We meet Perry (Ewan McGregor), a professor of Poetics at a London university and his girlfriend Gail (Naomi Harris) a British lawyer, as they travel in Marrakech. After Gail goes to their room early (something, we’re not sure what, is wrong between them), Perry is approached by Dima (Stellan Skarsgard), a tough Russian who persuades Perry to accompany him to a nightclub where drunken sex reigns.

The professor of Poetics is chosen by the Russian mobster to deliver a piece of paper to MI6. This will ensure, Dima says, the safety of his family who can survive only if Britain protects them in exchange for the paper in Perry’s hands. It takes a fair amount of concentration to grasp that premise, sunk as it was in the surrounding debauchery, melodramatic music, and background imagery that resembles an abstract painting on fast forward.

The extremely competent Stellan Skarsgard is asked here to portray a wild eyed, threatening Russian mobster caught in the danger of his profession. The scriptwriter makes the inexcusable mistake of having Dima yell the marvelous F- – -.word repeatedly. So effective with its terrific consonant strength when used sparingly at just the right times, so destructive in constant repetition, it turns Dima into a dunce.

By this time we are worried about Perry and Gail who are caught in a mobster plot that plunges into an absolute muddle as a small army of uninteresting characters is introduced. Only the few we have come to know convey the fear and danger of their situation. The rest contribute only confusion.

In this muddle of people and purpose, Naomi Harris manages to create a memorable character in Gail, a strong British lawyer with a mind and heart big enough to step up when she sees injustice. In a key role, she shines. Hector, the MI6 man (Damien Lewis) does a good job as a featured player whose motives aren’t clear.

A somewhat irrelevant question: why do filmmakers always take us into deep, dark woods when danger is imminent? It always serves to heighten the fear, but it has become a cliché. This is a movie dark in every way with a tepid, if honorable, hero and a dreary villain. I asked myself if my negative reaction might be due in part to the fact that I sat absolutely alone in a big theater with the inescapable feeling that the mobster might be sneaking up behind me. But the new emptiness of movie theaters is another story for another time, a sad one indeed.