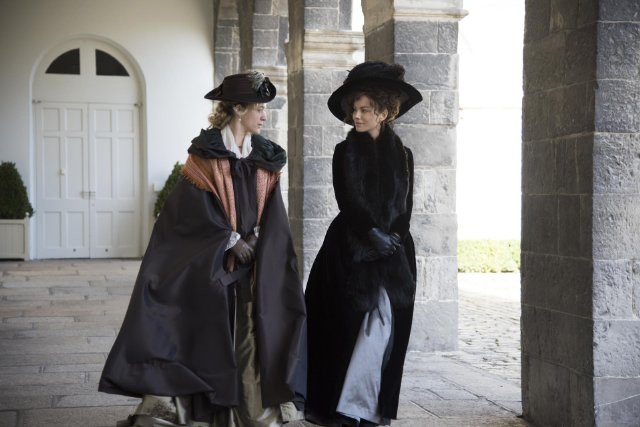 Whit Stillman has no equal in creating memorable characters imprisoned within the social rules of their time – whenever that time may be. With Love and Friendship, he has painted Jane Austen’s Lady Susan in colorful words and situations – some hers, some his – for our great pleasure.

In a flawless portrait, Kate Beckinsale creates Lady Susan Vernon whose deepest inner need is for control and whose way of getting it is manipulation. Newly widowed, Susan no longer has the money to live in the style she once knew. Since anything less would be unthinkable, she announces to her former in-laws that she is coming to visit.

With Susan’s arrival, writer/director Stillman introduces us to the eccentric family that generates the humor that is the bedrock of the story. The men, of course, wilt in the presence of Susan’s beauty and wit. The women are suspicious – except for one who knows one when she sees one and teams with Susan to manipulate the others. That would be Alicia Johnson (Chloe Sevigny) the visiting relative from Connecticut who describes her husband perfectly as “too old to be governable, too young to die.”

Catherine Vernon (Emma Greenwalt) knows from experience that Susan has not one honest thought in her head. Predictably, Susan targets Catherine’s younger brother, Reginald (Xavier Samuel), for herself, while Susan’s parents (Jemma Redgrave and James Fleet) win us quickly with their joint reading of a letter that triggers Sir James’ perfect riff on the “Twelve Commandments.”

Just to further stir the confusion, Lady Susan’s daughter Frederica (Morfydd Clark) arrives at the Churchill estate after being tossed out of her boarding school. Tom Bennett plays the doltish Sir James Martin with sublime density.

Kate Beckinsale’s Lady Susan soars throughout. Blessed with supple intelligence and thinking only of herself, she announces judgements and plans with venal sophistication. Beckinsale creates a woman whose inherent intelligence is devoted entirely to staying on top at a time when money bought all the trappings of power. Has anything changed?

A miscasting can ruin any story that’s all about words, and these actors relish the dialogue they have been given. Words are what this is all about – this comedy of intentions gone awry, the spoken phrases loaded with venom and multiple meanings. It is a magical blend of Whit Stillman and Jane Austin, and it is delicious.

Whit Stillman has brought his fascination with social rules to wildly different eras, usually with the perspective of time that allows observers of the moment to enjoy cultures of the past. Doesn’t that raise the question of whether he has considered commenting on the social layers of the ‘50s when his generation – and mine – were young and wallowing in our new post-war independence without any awareness that – for the most part – we obeyed the unspoken social rules of the moment? Sixty years have passed, plenty of time for Whit Stillman to find humor in that period of our unconscious compliance.