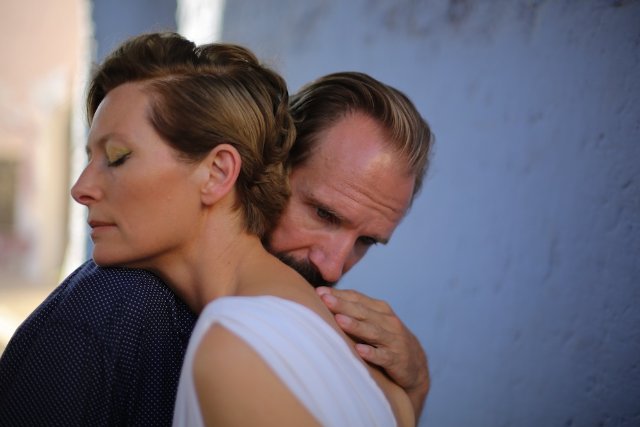 The easiest course for a reviewer caught in a dilemma is to resort to description. In that vein, I can report with ease that A Bigger Splash is filmed in glorious color on the beautiful Sicilian island of Pantelleria where Marianne (Tilda Swinton) and Paul (Matthias Schoenarts) are vacationing. She is a rock star rendered speechless by a throat problem; he is a filmmaker who is her lover. They are experiencing the luxury of making love whenever they choose in a beautiful place and that’s what they do – in bed, under water, in the sand, whenever and wherever they are moved by love and freedom.

Their idyll is interrupted by the arrival of Harry (Ralph Fiennes), a record producer and Marianne’s ex-lover who has on his arm Penelope (Dakota Johnson), the young blond he has recently learned is his daughter. The pool that is their playground is inspired by David Hockney’s 1967 pool painting ‘The Big Splash’. For more than two hours we watch four people canoodling on a gorgeous volcanic outcrop in various combinations that hold the seeds of the inevitability of some awful form of doom.

But that is not all that director Luca Guadagnino and writers David Kajganich and Alain Page had in mind. The graphic sensuality is accompanied by fragments of conversation that promise to answer the questions bubbling up in the audience, but we soon realize we are not watching a story unfold. There is no story. The dialogue is mere accompaniment to four people indulging their impulses in a place removed from any demands their lives may make of them at other times. The dialogue offers conversation that goes nowhere. Just try to follow any threads.

It is not unlike the theory of Zen Koan which holds that the process between riddles and their Zen answers leads to enlightenment, a process where the answers to the riddles usually make no sense to literal minded thinkers. Director Guadagnino has given us a series of riddles that have no answers. The best way through this annoying confusion is to ignore the meaningless dialogue and concentrate on the actors.

Ralph Fiennes leaves his Shakespeare at home and hits the island with hurricane force, rarely pausing as he talks, dances, and sings his way to rekindling his romance with Marianne. Matthias Schoenarts is appealing and accessible as Paul – at first one half of a contented pair who suffers desolation as Fiennes’ storm blows all beauty and peace apart.

It is Tilda Swinton who is the riveting focus. Take speech from an actor and she must convey everything through gesture and grace. Swinton is masterful as she walks, runs, and slides in her superb Dior clothes or in silent nakedness.

After leaving the theater, we agreed that none of us liked the movie. Then we went on to talk about it for hours, looking for that Zen enlightenment. Why did a movie we all disliked hold us for so long?