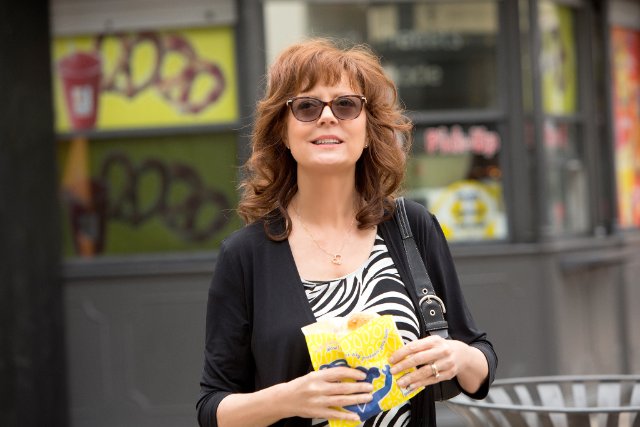 What a pleasure to watch a top flight cast create a movie that wins on every level. It’s Susan Sarandon’s story, no question about that, but in her wackily wonderful performance, she has great support from everyone else on screen. Let’s take a look at the wacky aspect.

The movie opens on Marnie Minervini (Susan Sarandon} as she unleashes a monologue in one of those New Jersey accents everyone who doesn’t live there thinks belongs to everyone who does. Marnie’s husband Joe has died and she is moving to California to be near her daughter Lori (Rose Byrne) who works as a writer in the production side of television. We suffer an initial wave of worry that this will be the conventional story of a mother driving her daughter crazy, but don’t waste a minute on that. This mother is in Susan Sarandon’s hands and she makes Marnie an original in every imaginable way.

Daughter Lori, sunk in misery after being unloaded by her boyfriend, is trying desperately to limit the interventions of her concerned mother. She tells Marnie to get busy, to find a life for herself. That’s what this film is about. A woman alone in her 60s with Marnie’s great big generous heart needs to help people, and she sets out to find them. Freddy (Jerrod Carmichael) a worker in an Apple store, Jillian (Cecily Strong), a friend of Lori’s who can’t afford a nice wedding. Marnie, who never for a moment stops talking and advising, becomes part of each of their lives until finally she realizes she can’t live just through other people. She has been busy but sad and emotionally alone.

When two men show interest in the spirited widow, she instinctively withdraws from each. She misses Joe. When Zipper (J.K.Simmons) takes her for a ride on his Harley Davidson, we are given the beginnings of one of the gentlest, most touching courtships to grace the screen in a long time. Sarandon and Simmons create something rare and real.

The wonder here is that the acting is so good that people of different ages seem to relate quite naturally to different characters. Older women feel Marnie’s aloneness; younger women understand Lori’s need for privacy from the mother she loves. A man nearby in the audience teared up gently because “It’s so real.” In writing this story about her zany mother, writer/director Lorene Scafaria has given us the pleasure of watching people of good will work things out with the people they love. It becomes obvious why this works so well: there are no villains here.

I can’t imagine another set of actors being able to bring this family story to such funny, lovely life. Susan Sarandon, Rose Byrne, J.K. Simmons, and Cecily Strong have made a wistful family comedy take flight for all of us. They’ve given us a genuine flash of light right in the middle of the summer doldrums. Don’t miss it.