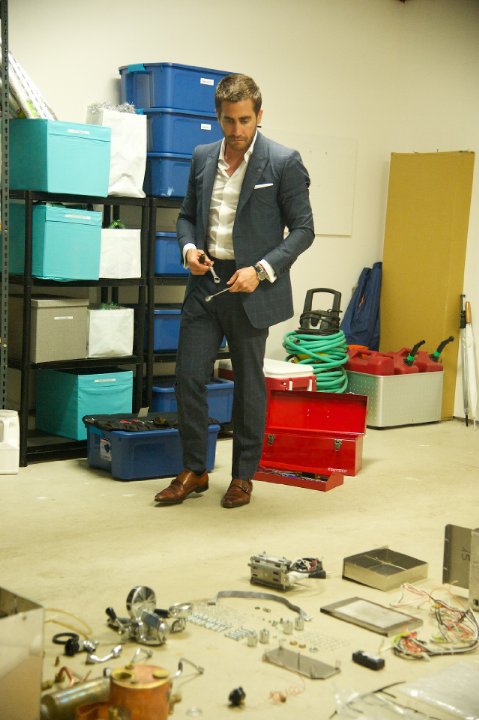 Demolition is a metaphor all dressed up in its best clothes by the filmmakers who probably thought audiences wouldn’t get it unless they hammered it home relentlessly. Let’s go step by unfathomable step.

The opening scene presents Davis Mitchell (Jake Gyllenhaal) and his wife Julia (Heather Lind), in familiar driving and chatting mode. In one of life’s terrible moments, a truck hits them; Julia is hospitalized and dies. It’s at this point that Davis enters an altered state that will last for most of the movie. Is he racked with guilt? Or, oddly, is he unable to feel any emotion at all?

That’s where director Jean-Marc Vallee and screenwriter Bryan Sipe wrap poor Davis in the metaphorical inability to feel anything. From that time forward Davis is a zombie of a fellow swamped by his creators in emptiness as they throw him into violent situations designed to ignite his emotions.

When the hospital candy machine denies him his pack of M&Ms, Davis embarks on a series of complaints to the manufacturer. His repeated letters grow in length and personal revelation until a young woman named Karen (Naomi Watts) begins to respond. That’s as close as Davis comes to expressing feeling. No such luck for his boss Phil Eastwood (Chris Cooper) who also happens to be Julia’s father. Cooper handles that tough assignment well by trying to understand his son-in-law’s odd behavior.

In that already imperfect scenario, director Valee indulges in some rotten stuff that just doesn’t belong on film in the current cultural climate. Consider: Davis taking Karen’s young son to the woods in bullet proof vests and shooting each other repeatedly with bullet balls that knock them over; or Karen’s thug of a boyfriend beating up her gay son; or Davis, still unable to feel, handing Karen’s vulnerable son a sledgehammer and inviting him to help destroy the perfect glass house where he and Julia had lived. Is our takeaway from all this that the true path to learning to feel is physical violence?

The astonishing part of this ill-conceived movie is that the actors who carry it are known by all of us to be genuinely accomplished. Jake Gyllenhaal, Chris Cooper, and Naomi Watts are praised repeatedly for doing excellent, often inspired work. Why did none of them see the problems here? Didn’t anyone consider talking to screenwriter Bryan Sipe – at the very least – about the wisdom of highlighting a recreational man/boy loaded gun duel in the woods? And the house. No doubt it was made especially beautiful so its destruction would seem even sadder.

Isn’t this a perfect chance to ask some serious questions about the role movies play in igniting trends in the violent world that now surrounds us? Please, Mr. Sipe, don’t think you have written a metaphorical masterpiece. Your metaphors are too long, too excessive, and too obvious. You don’t need to hit your audiences with the sledgehammer you used to demolish the house.