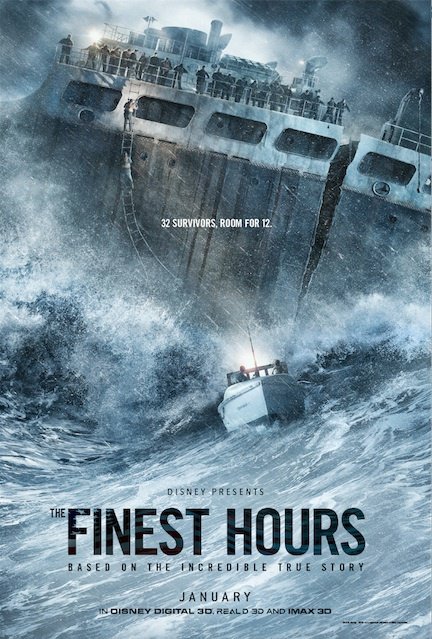 The Finest Hours is what happens when Hollywood exults in new technology and overlooks the old fashioned details. It is now possible to create an on-screen storm where wind-whipped waves roll with a terrifying force that reduces ships to helpless specks and rivets appreciative theater audiences to their chairs. But when Hollywood insists on inserting frequent cuts to personal dramas, they dilute the spectacle that is unfolding so dramatically on-screen.

The blizzard of 1952 broke two oil tankers in half leaving 33 crew members stranded on the sinking ship Pendleton. At a small Cape Cod Coast Guard station, Commanding Officer Daniel Cluff (Eric Bana) assembles a crew to carve its way to the sinking ship in the only boat available – a small, vulnerable skiff.

Skippering the boat is Bernie Webber (Chris Pine), a serious, capable sailor who makes his choices with a considered formality entirely at odds with the reality of the danger ahead. After the survivors are packed in the rescue boat, the storm intensifies and the boat takes on the look of a Hawaiian surfer shooting the curl of each mountainous wave. It is an extraordinary sight confirmed by accounts of the legendary rescue.

What about those old fashioned details? Bernie Webber is engaged to Miriam (Holliday Grainger), a determined young woman dressed for the storm in a perfect ‘50s print dress. She confronts Officer Cluff with her demand that he order the small boat to return to port. Her extended car-stuck-in-the-snow scene is long and unnecessary. The sudden cuts between the storm scenes and the on-shore drama cripple the tension we have been feeling at sea. Though Grainger does a good job with her role, personal entanglements are real mood breakers given the disaster off shore.

This is just one of the current movies that recreate the 1950s – now seen as ancient history – with old cars, print dresses, high heels, dark red lipstick and cigarettes. I have yet to see a contemporary actor who knows how to smoke.

Another detail: the accents. The crew does its somewhat mixed best to sound like Cape Codders while Officer Cluff could be from another planet. The failed accent struggle is a laudable but misplaced effort to plant the action where it actually happened.

And the big one. Whenever the action shifts from the storm to conversations on the small boat, both characters and boat are virtually untouched by the sea that boils around them. The boat that is battered in outdoor shots becomes dining room still. Despite the jolting detours, credit Chris Pine and Holliday Grainger with creating strong characters and Casey Affleck with giving us Ray Sybert, a wise engineer who becomes a leader on the tanker deck and a welcome focus for the audience.

Be sure to stay for the credits that include photographs of the storm, the rescuers, and those they saved. This movie is all about water. Just watch those waves.