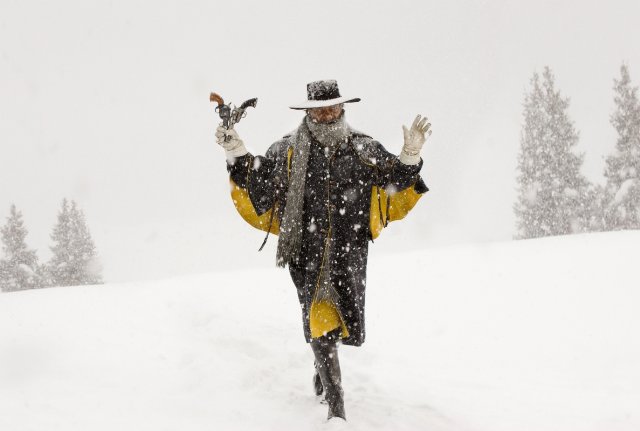 Quentin Tarantino did one thing right in his latest movie; he nailed the title: The Hateful Eight. And you will be stuck with all of them in a blood-soaked barn for two hours and forty-seven minutes. Tarantino’s movies usually contain a few redeeming features. Just two here, and they are dwarfed by the problems. But to be fair, let’s start at the beginning as if we know nothing about the awful unfolding.

In post-Civil War Wyoming the West is being settled and a blizzard is sweeping the landscape. A tiny speck appears in the distance. It is a black stagecoach pulled by teams of black and white horses – a glorious sight against the vast whiteness of the windswept snow. The opening minutes – all set to Ennio Marricone’s grand score – are breathtaking. Who, we wonder, would be out in that storm?

He who dares is John Ruth (Kurt Russell), a bounty hunter bringing a criminal to Red Rock to be tried and hung for murder. The killer is the infamous Daisy Domergue (Jennifer Jason Leigh) and Mr. Ruth has her handcuffed to his arm to prevent her escape. Bringing her in will net him $10,000.

Things change when the storm ravaged stagecoach is stopped by another bounty hunter, Union officer Warren (Samuel L. Jackson) who talks his way on board for the ride to Red Hook. Five minutes into the film we are in the company of two rough men and an unrepentant murderer with a black eye, bloodied cheeks, and a sharp tongue. They decide to seek refuge at Minnie’s Haberdashery, a barn of a place known for its woodstove and food. It is here that we begin to endure the introduction, one by one, of stragglers from the storm. We meet Chris Mannix (Walton Goggins), Joe Gage (Michael Madsen, and already there, angry old general (Bruce Dern) who is looking for his son. The hateful eight are assembled.

We suffer close-ups of heads exploding as blood and innards flood the air while violent beatings leave victims just this side of dead. Even worse, if that’s possible, only Daisy and Samuel L. Jackson’s Major spark our interest. The rest are rotten, dull thugs who are verbally and physically violent while yelling ludicrously in modern slang.

When we learn that no one is who he says he is, that mystery fails to stir us because the alternate identities are as densely uninteresting as the initial ones. But hearken! The one exception to these discouraging generalizations is a crackerjack performance by Jennifer Jason Leigh who endures the entire 167 minutes handcuffed and bloody while spitting out her own venomous insults. Who is this nasty, brave, nutcase? In this movie, she is the only character who tweaks our curiosity. Certainly her creation of Daisy Domergue will stand as a classic of Hollywood villainy.

Leigh and the blizzard are Tarantino’s redeeming features here though neither is enough to save this movie.