A Doctor vs. the NFL 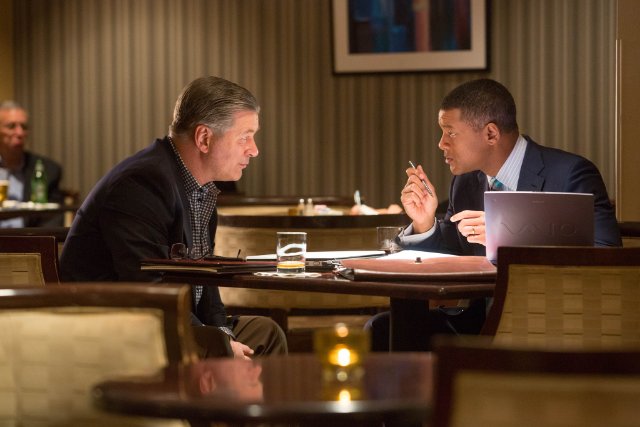 Powered by truth, Concussion joins the battle between the National Football League and doctors who blame football for brain injuries that have killed former players in their 40s and 50s. This movie is the story of Dr. Bennet Omalu, an accomplished pathologist who was determined to prove his case.

Dr. Omalu, born in Nigeria, trained in England and America, is the pathologist assigned to discover the cause of death of Mike Webster (David Morse), renowned center for the Pittsburgh Steelers who died at 50 ostensibly of cardiac arrest. When Dr. Omalu’s initial tests found nothing that could explain Webster’s death, he looked further and discovered why Webster had lost his mind. In all humans, the brain floats untethered in fluid. Mike Webster’s brain had been battered by his skull.

The movie is the story of what the NFL does to discredit Dr. Omalu as he tries to prove his conclusion in an effort to save men, from CTE. He realizes boys are at risk from their earliest days of school football. Because some of the men he examined were Pittsburgh heroes, his work quickly drew public attention along with rage from the NFL. As the big entertainment story of our time, the NFL Empire had grown to be worth billions of dollars. In the stands, audiences roared approval for the hardest hits. On television, this American version of throwing victims to the lions drew millions of delighted viewers.

This movie is an effort to validate Dr. Omalu’s work and to hold the NFL responsible for refusing to recognize CTE.
Trying to widen the film’s appeal, writer/director Peter Landesman and co-writer Jeanne Marie Laskas (who wrote a GQ article called “Game Brain”) have leaned heavily on the personal life of Dr. Omalu and his wife Prema (Gugu Mbatha-Raw, in a quiet, convincing performance). The sub-plot script feels like an add-on and lets the movie down.

Will Smith is consistently credible as the humane Dr. Ormolu and Alec Baldwin is excellent as Dr. Julian Bailes, former team doctor for the Steelers, who has seen the truth of the deaths. We watch their story from the initial discovery up through the NFL investigation carefully designed to calm the public reaction.

In a scene shockingly similar to Big Tobacco assuring the world that smoking didn’t cause lung cancer, law firm Covington and Burling assures the world that football doesn’t cause CTE. Like so many corporate cover-ups, this one is embarrassing.

Credit Peter Landesman for keeping another power scandal on the front pages and for casting Will Smith in a role that brings Dr. Bennet Omalu to vital life. Who will win this one? The Nigerian doctor or the NFL? For a while at least, CTE will claim brains.