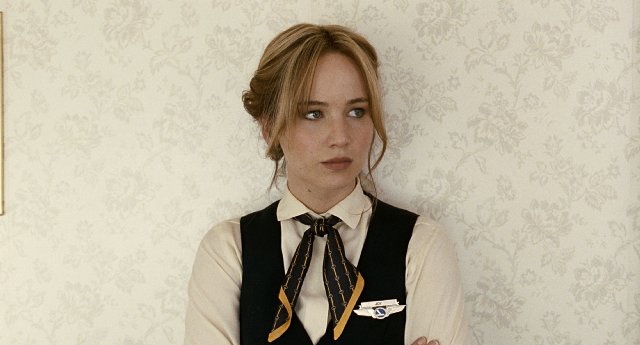 If audiences seem divided in their enthusiasm for Joy, count me among those who loved it. Would the true story of the woman who invented a Miracle Mop have worked without Jennifer Lawrence? Of course not. But she knows exactly how to navigate director David O. Russell’s odd story of a driven inventor in a house full of crazies. Together, director and actor seem to have a firm grip on a quirky blend of drama and comedy that is rare and delectable.

Watch what Lawrence creates here. Joy (Lawrence) is born into a comically dysfunctional family. As a child (nicely played by Isabelle Crovetti-Cramp), she creates an imaginative fantasy village with paper cutouts. As a young mother, all her energy goes to the physical and emotional upkeep of her ridiculous relatives. Trying to enforce an impossible truce in the household is for her a full time job. Just look at the odds.

Her father, Rudy (Robert De Niro) moves back into the house along with Trudy (Isabella Rossellini), his feisty new online Italian girlfriend who ends up financing Joy’s new product along with angry warnings of probable disasters. Step-sister, Peggy (Elizabeth Rohm) undercuts her at every turn while Grandmother Mimi (Diane Ladd) offers only love and support. Best friend Jackie (Dascha Polanko) proves her loyalty repeatedly and ex-husband Tony (Edgar Ramirez), is a bar singer, who lives, of course, in the basement.

The energy Joy gives to keeping this establishment afloat is the same innate force that will propel her to invent the Miracle Mop and to extinguish the business brush fires that accompany her eventual success. Because she is nearly undone by circumstance at every turn, nothing in this acting challenge is easy.

Succeeding against those odds is a battle between the impossible and a fierce determination to succeed. When she meets Neil Walker (Bradley Cooper), we expect a romantic alliance but Joy is the grown up version of the child who said, “I don’t need a prince” when offered a paper cut out of one to complete her beautiful village. Instead, Bradley Cooper is the established business mentor to her achingly inexperienced inventor. As always, he does it well. Russell/Cooper/Lawrence – again a great team.

As Jennifer Lawreuce drives Joy through business setbacks and family chaos, she manages – without an ounce of overacting – to show us the depth of her fear, excitement, and sadness as each comes her way.

The supporting players telegraph dysfunction while David O. Russell has crafted a nearly impossible role for a woman who must steer herself through chaos without losing a grip on her dream. Lawrence manages to transform a rather strange story about a mop into a woman’s touching struggle. She is an actor whose uncommon grasp of the power of understatement lets her lift any story – even this strange one – beyond what it seems to be. Jennifer Lawrence is genuine and that’s what makes this movie work.