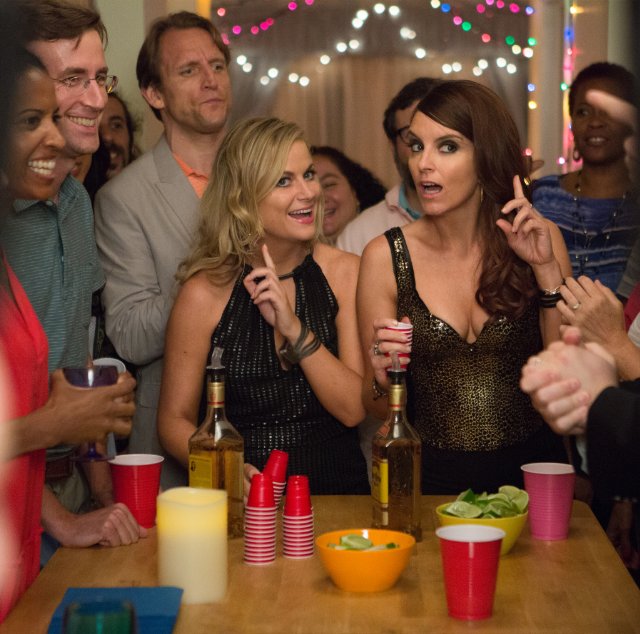 Tina Fey and Amy Poehler have become icons in the entertainment world through their intelligence, wit, and sense of fun. They can stand side by side onstage and cause an entire national TV audience to dissolve in laughter with sharp verbal darts aimed at the prevailing culture. How can it be that they have just opened in a perfectly awful movie called Sisters?

It is no fun at all to rip the efforts of these two women who are widely and justly admired for inspired work in writing, producing, and acting, but blame for this debacle rests squarely on their shoulders. This is their production.

Scriptwriter Paula Pell shares blame for the misguided idea that snippets that work on SNL can sustain a feature film. She has used these bones for her plot: Kate (Tina Fey) is, for the moment, homeless, jobless, and single. Sister Maura is divorced and devoted to doing good things for people in need. Mom (Diane Wiest) and Dad (James Brolin) are selling the family house just as their daughters decide to go home to pull themselves together.

After the sisters decide to throw a farewell-to-our-roots party with old high school buddies, we are treated to sex and poop humor usually found in grade school or later on in alcohol fueled fraternity parties in college. So now we know that even women can come up with an Animal House type freak show for our viewing pleasure. Until now it hadn’t been clear that women needed to prove to the world their ability to be as unimaginative as fraternity boys.

One sly line comes from a silent giant of a man, a tattooed drug dealer (John Cena) who, when asked if he has children, replies, “I’m sure I do.” That one brought the single laugh I heard on opening night. But how about the sight of another man who manages to insert a music box ballerina in his lower body cavity and spends long minutes of our time trying to extract it with Maura’s help? Watching comic Bobby Moynihan run around drunk and without his pants? None of it is funny or shocking; it’s just stupid.

What are Fey and Poehler trying to do here? If their goal is to crush forever the male dominance of on-screen smut, they have succeeded, but why is that a goal for two women who are so capable of holding an audience with a more sophisticated level of humor?

Can you imagine what they could do if they decided to skewer the culture that is devouring all of us now? Imagine them double teaming the election of 2016, the destruction of the American press by the entertainment culture, the obliteration of the white middle-aged male power structure by kids who scoff at traditional routes to power. Fey and Poehler could raise any of that to high comedy. But proving women are as good as men at giving drunken fraternity parties? Sisters is boring, labored, and dumb.