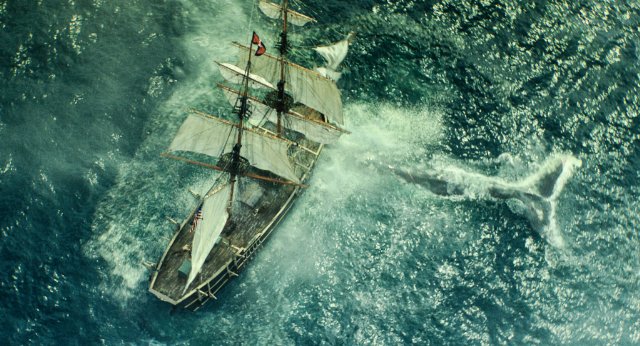 Your mind won’t wander during In the Heart of the Sea. The story of the tragic voyage of the whaling ship Essex from Nantucket to the South Pacific has opened to middling reviews but if you park your sophistication at the door you won’t be disappointed. Though this is an easy movie to pick apart with a critical eye, it’s much more fun to surrender to the power of the sea as it washes over us through a combination of good movie making and technological magic.

Let’s get rid of the problems first. The soundtrack overwhelms the action, and in this movie, that’s hard to do. It feels as if composer Roque Banos is telling us how to feel – be scared here, be moved there – and often, his music erases the dialogue we are straining to hear on-screen. A query to the theater manager brought this answer: “there is no volume control on the movies, what we get is what you hear.”

And then – hold on, we’ll get to the good part – director Ron Howard – faced with building a two hour movie on Nathaniel Philbrick’s novel about an epic sea voyage – tries to give us the various dramas of the crew along with the politics and culture of the Nantucket whaling industry. That’s a lot for two hours.

How about the story and cast? Herman Melville (Ben Whishaw) visits an old survivor of the Essex disaster – Thomas Nickerson (Brendan Gleeson) who had sailed as a boy on the Essex (Tom Holland) under an unqualified Captain Pollard (Benjamin Walker). The hero of the piece is Owen Chase (Chris Hemsworth) who outshines the weaker Captain.

With quietly competent help from Mrs. Nickerson (Charlotte Riley) Melville extracts the story of the Essex from her reluctant husband. After years of refusing even to mention the story, he then reveals the “secrets that fester in a man’s soul.” Each of these actors does a good job with the material he is given, especially Tom Holland as the young Mr. Nickerson. We, in turn, have the pleasure of watching the raw material for Moby Dick unfold.

Now, the very good part. The combination of actual filming (they built a full size replica of the sailing ship) and computer generated imagery (CGI) creates an ocean that tosses the ship and its crew like flakes in the wind. It is easily possible to watch this movie in a state of motionless terror that is director Ron Howard’s main accomplishment.

I suggest that you ignore any flaws that trouble you and let yourself be struck by the spectacle of a massive storm, a vulnerable sailing ship, and wooden longboats carrying helpless men in a sea of whales. At the same time, director Howard has made sure we are wondering about the layers of meaning in the brain of that white whale who is following the ship. Think of Melville and Moby Dick. Let yourself be thoughtful and scared. That’s the good part.