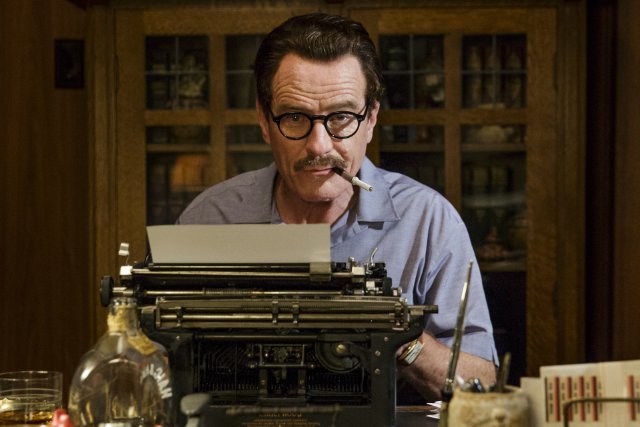 You won’t nod off in Trumbo. The movie covers the public controversy that swirled around the scandal of the Hollywood Ten from 1947 until well into the 1950s. The focus here is Dalton Trumbo (Bryan Cranston), a top screenwriter who had already written two of Hollywood’s most successful films: Kitty Foyle and Thirty Seconds Over Tokyo.

Accused by J.Parnell Thomas’s House Un-American Activities Committee of being a member of the American Communist Party, Trumbo admitted membership and defended his constitutional right to free speech in a splintered culture. He was open and principled, whip smart and unglamorous. In an earlier version of the polarization we see today, Trumbo was vilified for his beliefs, not his actions, and spent years writing under pseudonyms to support his family.

As a top Hollywood screenwriter in ’47, Dalton Trumbo lived a comfortable life on a farm by a lake with his wife and three children he loved. After HUAC finished with him, after serving a jail term, he continued to write scripts that had to be signed by a friend. Two of these – The Brave One and Roman Holiday won Academy Awards. The turn came when Kirk Douglas and Otto Preminger insisted that Trumbo sign his own name to his scripts for Spartacus and Exodus.

Brian Cranston’s Trumbo is an eccentric. Imagine a man who writes thirty pages a day in his bathtub to support his family. To his credit Cranston conveys the eccentricity without diminishing the man’s intelligence and integrity. As Cleo Trumbo, Diane Lane delivers a moving portrait of a ‘50s wife and mother whose strength holds her family together. She does it without drama and with presence. Madison Wolfe is just right as their bright, curious daughter Niki who will grow into her adult self with all the strength and determination of her parents. Credit Elle Fanning with making the adult Niki, appealing, strong, and unpredictable.

Much of the movie’s appeal comes from the use of actual news clips. Trans-Lux newsreels – the only filmed source of news for the public before television – show pieces of testimony alongside appearances of celebrities of the time. Director Jay Roach alternates these newsreels with actors portraying the real principals. John Goodman in a strong turn as Trumbo’s reluctant ally; Dean O’Gorman as a Kirk Douglas, Christian Berkel in a terrific turn as Otto Preminger, Richard Portnow as Louis B. Mayer at his real life worst, and Louis C.K. as an intemperate colleague.

The movie is enhanced by the interweaving of historical truth with the filmmakers’ interpretation of the lives of the characters, always a winning combination when done as skillfully as it is done here. What we have is a movie rooted in historical truth with careful recreation of the players of the era. The irony of it is that a writer vilified and jailed by HUAC has a record of writing movies that have lasted in the public consciousness for more than sixty years.