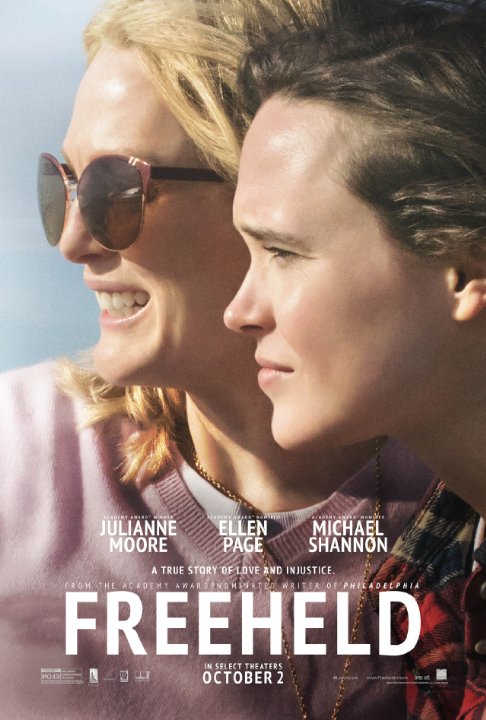 Freeheld has been made with great care by people with a deep sense of mission for the cause of gay marriage. The movie is a reflection of the efforts and often the suffering that preceded the Supreme Court ruling that made gay marriage a legal right for those who choose it. The fact that the movie is based on a true story that unfolded in Ocean County, New Jersey a decade before that ruling deepens its emotional charge.

The movie tells several different stories, some more effectively than others. In the first one, we meet police officer Laurel Hester (Julianne Moore) in a crime scene that tells us she is a strong police officer who can measure up in the toughest of circumstances. In the second we learn about the trust that ties her closely to Dane Wells (Michael Shannon), her police work partner during her 23 years on the force . In the third, we learn she is a closeted lesbian looking for a woman to love. That’s a lot of material for one movie.

After they become lovers, Laurel and Stacie (Ellen Page) succeed in becoming registered domestic partners in New Jersey. When Laurel is diagnosed with terminal cancer, they fight to secure pension benefits for Stacie from Freeholders who refuse them repeatedly. Just one member of the board (Josh Charles) explores his own conscience.

Julianne Moore and Ellen Page are reserved and quietly competent in their performances as partners but this is a message movie that never really jumps alive. Why, we wonder, is it that we don’t form a real connection to either character? Conclusion: mediocre writing. Both these actors deserve better. Good writing could have given them a script that crackled.

The real gut of the movie comes from Michael Shannon, Laurel’s police partner, who moves from disbelief to acceptance to strong support. His is a fine portrait of people who have come slowly around to acceptance of the right of people to live as they choose.

The one thing that violates the careful tone of the movie is the performance of Steve Carell as an out-of-town crusader who insists on using loud, rude, ridicule as a tool. It is entirely out of sync with the women and the men who begin to understand them. His angry rants at the Freeholders just don’t work when everyone else is making the same point with quiet dignity. His ideological rage nearly sinks the movie.

What is surprising is the degree to which the bigotry of ten years ago has vanished both legally and emotionally. The ultimate cave in of the Ocean County Freeholders is a reflection of the gradual steps that let the Supreme Court know that Americans were ready for the decision they were about to make. The result? The movie seems a little like ancient history. In the pre- information era the change we have seen would have taken decades. In the new world it took just one.