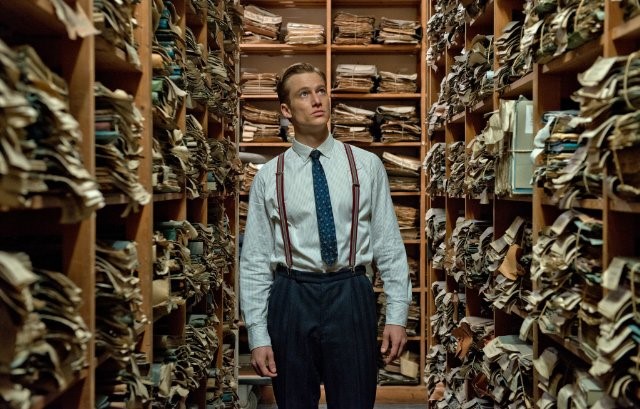 During the decade after the close of World War II, a wave of silence enveloped the Nazi party. While the world press published the facts and photographs of the Holocaust for a stunned world, the German power structure built a protective wall of silence around the war criminals who had designed, encouraged, and committed the atrocities. No one admitted a personal role in death by torture, gas, or bullet.

Labyrinth of Lies is the story of Joseph Radmann (Alexander Fehling), an ambitious young public prosecutor who begins to probe the silence after learning that Charles Schulz, former commander of Auschwitz is teaching children in a Berlin school. That discovery ignites in Radmann a furious determination to bring Schulz to justice. This is the story of his search for the specific identities of the Auschwitz criminals as the legal path to prosecution.

Radmann encounters the collective amnesia of the German establishment that remains united in erasing the past. By the late ‘50s there is an entire generation of young Germans who know little of Auschwitz. The power of the film lies in the fact that when the Auschwitz trials finally begin in 1963, Germans are prosecuting Germans in a country that doesn’t want to know the truth.

As Radmann, Alexander Fehling is front and center throughout as he creates a young man obsessed with his demand for accountability. He does a masterful job of showing us the emotional toll exacted on a man who takes on his own country in the cause of justice. He is supported by two blistering performances from Johannes Krisch as Simon and Andre Szymanski as Thomas. Credit director Giulio Ricciarelli for a presentation of the victims’ stories that is powerful without being graphic. That said, anyone hearing a word of Thomas’ story will never forget a word of it.

When Radmann and Simon visit modern Auschwitz together, Simon says “what you have here is a fence and a meadow. Without the trial, these stories will be forgotten.” Toward the goal of a trial, Radman interviews victims and identifies 211 of their torturers. In reality, when the trial finally took place in Frankfurt in 1963, not one of the 211 defendants showed remorse.

The question of what the world has learned remains open. On one hand, we see the remarkable determination of Angela Merkel to help refugees in what surely is born of the lessons of the Holocaust. On the other, we must face the truth of the torture committed by Americans in the Middle East. We want to forget, we want not even to know. Once again, collective amnesia surfaces.

The importance of this fine German film lies in the plea that all countries learn from the past and hold individuals responsible for the violation of accepted codes of human behavior. If war is the language of man, at least hold mankind responsible for indulging in savagery. Labyrinth of Lies is a movie of ideas that we avoid at our peril.