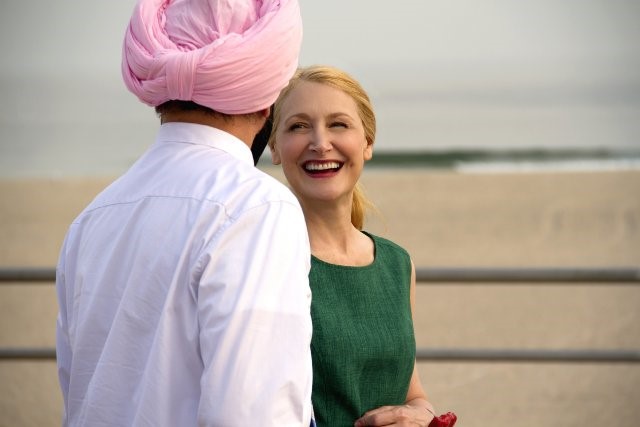 Learning To Drive is an unusual combination of good actors and an odd story that is rooted in metaphor. That said, here is the plot without the complications; we’ll get to those later. In the back of a taxi, Wendy (Patricia Clarkson) and Ted (Jake Weber) are involved in an angry marital argument that ends with Ted’s announcement that he is leaving her. Ted instructs Darwan, the cab driver (Ben Kingsley), to take his newly abandoned wife to the home they have shared for twenty years. Ted walks away.

When Wendy faces up to her new situation, she remembers that Darwan had told her he moonlights as a driving instructor. She will learn to drive from Darwan so she can drive to Vermont to visit her daughter Tasha (Grace Gummer) who is involved in a vaguely described farming community in Vermont. And so the subtleties begin.

During the marital dissolve in the taxi, Darwin had been listening quietly. That is his way and now he sits in the passenger seat dispensing lessons that are wrapped in calm metaphorical allusions. At this point, we begin to wonder where this story is heading. Two people from vastly different cultures meet, one with need and the other with wisdom. Now where?

Writer Sarah Kernochan injects a surprise with the arrival of Jasleen (Sarita Choudhury) who has been chosen by Darwan’s family to be his wife. In the alien American culture and without an ounce of emotional connection, they marry. Jasleen, who speaks no English, spends her days in his apartment, speaking no English while Darwan and Wendy continue the driving lessons that are helping her leave her own crisis behind. There is a nice scene where Jasleen ventures into an outdoor market and is befriended by a woman who sees her predicament – a perfectly credible happening in an outdoor New York bazaar. If the movie seems slow at times, it is a gentle story of recovery and friendship of an unlikely sort.

Ben Kingsley – cloaked in Ghandi saintliness – is quietly fine as he teaches driving as a metaphor for living. Grace Gummer, in a small part as Wendy’s daughter, has to speak unwelcome truth to her mother and does it well. Patricia Clarkson, always good in building a complex character, holds our attention completely as she searches for a new life plan while listening carefully to her mentor. Clarkson can convey a mind in turmoil without saying a word.

While we once wondered where the movie was going, it becomes clear, as the story winds down, that Wendy and Darwan have arrived at natural paths in their lives, each one quite different from the other. The new directions each has discovered have grown in the most natural way from all they learned in the driving lessons. With an original eye, writer Kernochan gives us the pleasure of watching two people learn gradually that an emotional crisis can become a positive turning point.