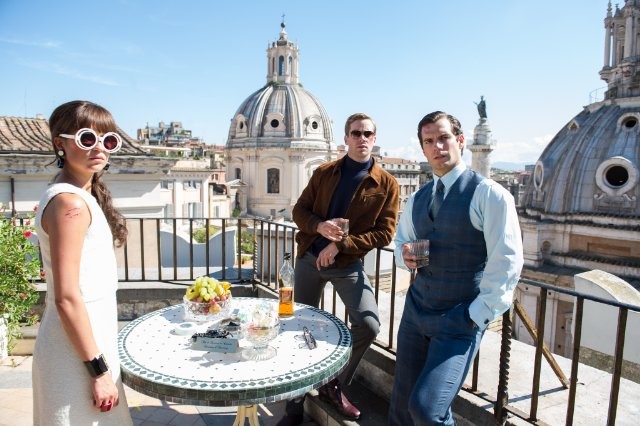 The Man from U.N.C.L.E. can only be a disappointment for action fans old enough to have loved the TV series of 50 years ago – and yes, it has been 50 years. Young people may well be baffled by the Cold War background that has been eclipsed by other eruptions, and really young people will probably be scared.

The core problem is that director Guy Ritchie has made a movie of choreographed violence that reflects Hollywood’s infatuation with the new era of high tech special effects. How does that play today? Not well. The movie opens with a fine car chase that leads to pursuit by helicopters, planes, motorcycles, and boats on land, air, and sea. Vehicles and people are loud, and full of fury. Most are equipped with machine guns that fire relentlessly without hitting their targets.

Another downer: in a plotless movie, it is nearly impossible to follow Mr. Ritchie as he cuts quickly between unrelated scenes. Napoleon Solo (Henry Cavill) is a CIA agent; Illya Kuryakin (Armie Hammer) is a KGB agent; Gaby (Alicia Vikander) is of unclear loyalty. Gaby’s clothes are among the high points; watch for a white coat and hat that remind us what good taste is all about.

Solo and Illya have been teamed up and ordered to find Gaby’s father who was Hitler’s “favorite nuclear scientist” and is still at work designing a nuclear weapon for immediate use. That’s the plot in one sentence but it is secondary to the deafening chases among the agents and their enemies who are trying to stop our heroes from finding the scientist. Nothing the agents do seems to have anything to do with their mission. This is a movie about a director’s passion for blowing things up, period. Fans of the old TV series will long for Robert Vaughn and David McCallum.

The final erosion of audience pleasure is the miscasting of Henry Cavill as Solo. Any one of us could have warned the casting director that you don’t cast a man who has a strong physical resemblance to John Travolta in the role of an American spy. Travolta may be a great dancer but I don’t want to think of him every time Napoleon Solo comes on screen. It’s not fun to rip an actor but Cavill lacks the sophistication and innate light touch so essential to spy capers. He is a stiff cardboard figure.

Credit Elizabeth Debicki with creating a detestable villain and Hugh Grant for surprising us in a straight faced role as an agency officer. Armie Hammer is just fine as Illya, especially when he lightens his ferociousness with a touch of genuine emotion. In the movie’s only guessing game, the talented Alicia Vikander paints Gaby as an appealing mystery. Her loyalties and her safety supply the movie’s only guessing game.

I can only say that if you want an exciting, clever, mentally challenging summer action flick, go see Mission Impossible – Rogue Nation.