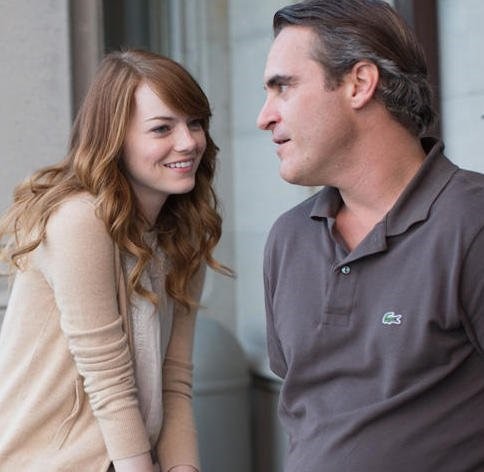 The Irrational Man gives us Woody Allen at his bizarre best. In a fine beginning, he tells us what we need to know. The Braylin college campus is abuzz over the impending arrival of Abe Lucas (Joaquin Phoenix), a philosophy professor known for his brilliance, unorthodox teaching, and affairs with students. The man we meet is a wasted alcoholic who drinks to shield himself from his own disillusionment.

In class, Abe unleashes bitter reflections on such things as the role of randomness in life and sure enough, one especially bright student named Jill (Emma Stone) is fascinated. When he praises her paper, she’s done for. Jill and Abe engage in a long slow dance around her seduction of him. He tries to say no but she is determined to experience this brilliant guy despite his negativity about life.

When Abe hears about a young mother being victimized by an unfair judge, his insides turn to rage. The exact moment of his decision to take action lifts the bitter professor to a new lightness, to a realization that he can become someone after all, someone who will achieve something more than just finishing yet another book on “Heidegger and the Nazis.” He will save that mother.

After devising a diabolical plan, he spins into a non-alcoholic high. “Suddenly my life has a purpose!” And while Abe carries out his scheme step by immoral step, Jill who has been mesmerized up to this moment suddenly sees his villainy. Immediately, she becomes the teacher and he the wayward student. It’s a tough role for the talented Emma Stone. First she’s the enamored college girl, and then circumstance demands that she become the preventer of her lover’s crimes.

The quite ordinary first third of the story gives the audience plenty of time to think about Woody Allen. Where is he going with this meandering, rather uninteresting tale of professor/student romance? He’s setting us up. We know perfectly well by now that his mind has designed some sort of a twisted path for us to follow and it unfolds in an orderly way, step by careful step, until finally it explodes. We are watching a professor find his life’s first genuine joy as he wraps his immoral, criminal acts in philosophical justification.

Is this a good movie? No, but just watching the spillage from Woody Allen’s mind is an experience. Part of his peculiar genius lies in casting actors who come to love his wacky process. Under his direction, they manage to create eccentric characters who make us laugh aloud even as they do terrible things. Emma Stone, Joaquin Phoenix, Parker Posey and young Jamie Blackley – with fine support from others in smaller roles – deliver this one for our pleasure. As we watch another of his convoluted tales unfold, a question washes over us: is there no end to Woody Allen’s calculated cleverness? And the answer is no, no end at all. And he’s only 79.