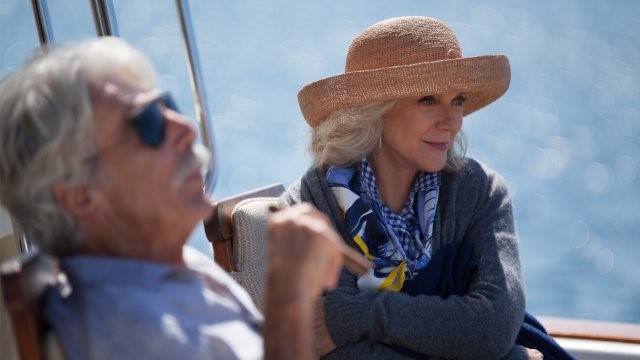 “I’ll See You in My Dreams” is a brave movie. We all know Hollywood does not like making movies about old age unless they plant a peripheral old character in a young landscape – somebody’s old uncle in a state of comic decrepitude. But even Hollywood caves whenever the baby boomers approach a new life stage. They are growing old now and we can expect a flood of films dealing with age as if it were a brand new phenomenon.

As much as audiences might want an upside, “I’ll See You in My Dreams” deals in reality. Given that old age is riven with loss of all kinds – of partners, friends, homes, and companionship, Director/editor/co-writer Brett Haley should be commended for never once pretending otherwise. This sets the tone for the fine movie he has made.

Haley’s decision to lure Blythe Danner, now in her 70s, to portray Carol Petersen ensures success. This intelligent actress plays her role with great restraint, never reaching for any of the false notes that would have undercut the honesty of the story. Quick cuts in the early scenes show us the essence of Carol’s life. Her only companion is the ailing dog she loves dearly; she resists leaving her home to join her three friends in the retirement community, and she spends her time reading and straightening up an already immaculate house. She has held onto that house from her love of the past, but it is, like her life, empty.

At the urging of her friends, she tries a cruise, bridge, and a hook up gathering but this is a woman who would rather be alone than settle for mediocrity. When Bill (Sam Elliot) spots her on a visit to the retirement home, he begins a tentative courtship based in respect for the fact that neither has been with anyone else for twenty years. They’re rusty at this game.

It’s at exactly this point that director Haley might have indulged himself with the happy couple walking off into the sunset. Instead, he stands firmly rooted in the reality that sooner or later in every couple, one person ends up alone. Perhaps the next movie will catch the flavor of a lone old woman who has found the tools for staying engaged with people and life.

In this first foray into a tough topic, Blythe Danner is thoroughly credible. Sam Elliot delivers an understated and appealing performance as Bill. Together they make us believe for just a moment in second chances during old age. They are supported in the best of ways by a very serene Martin Starr as the young pool cleaner who becomes Carol’s friend and by Malin Ackerman who portrays her daughter. June Squibb, Rhea Perlman and Mary Kay Place show us the pluses and minuses of retirement homes. A salute to all of them for starting a conversation about the realities of the end of life.