A Confusing Stew
An Illusion Review by Joan Ellis 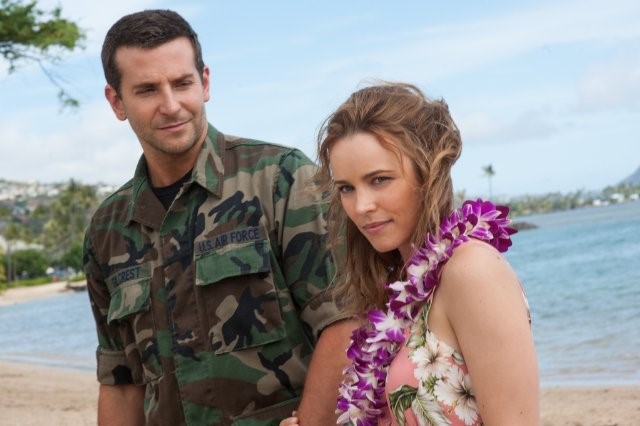 Aloha rattles around in a state of simple minded confusion. Why go? One reason might be that the promise of a strong cast makes it more appealing than the grim summer competition. Another is the competence of writer/director Cameron Crowe which seems to have deserted him here. He plants seeds but leaves them unresolved as if he poured the contents of his electric mind straight onto the screen while forgetting to hand it to an editor. The odd result is that Aloha is a failed movie that is strangely enjoyable – at given moments – in spite of a flood of flaws. Perhaps there is a perverse astonishment in watching the promising elements self-destruct.

Here is the studio’s summary. “A celebrated military contractor returns to the site of his greatest career triumphs and reconnects with a long ago love while unexpectedly falling for the hard-charging Air Force watchdog assigned to him.”

Now imagine Bradley Cooper as hero Brian Gilcrest, Emma Stone as his watchdog Allison Ng, and Rachel McAdams as Tracy Woodside, the long ago love. Toss in Bill Murray as billionaire plotter Carson Welch, Alec Baldwin as an unhinged General Dixon, and John Krasinski as silent Woody Woodside. Add the backdrop of beautiful Hawaii. These are the bones of a comedy that can’t fail.

The fun for the audience lies in watching these good actors wrestle with their assignments. Bradley Cooper does well by the Air Force hero who has just been dealt a secret assignment that could destroy whatever trust exists between native Hawaiians and their stateside rulers. Rachel McAdams creates an honorable former lover. In a tough role, Emma Stone switches between the spit and polish of Air Force Captain and young woman smitten with her assigned officer.

In one good comic scene that is a genuine laugh generator, Bradley Cooper and John Krasinski – unable to voice the complicated emotions consuming them – stand in a silent, peacemaking hug while overhead subtitles spell out what they wish they could be saying to each other about the woman each of them has loved. As it should be, the stew of complications among the principals is the core of the film. Everyone in the featured quartet is a decent person – no dark motivations there, just circumstance.

Not content with just comedy, Cameron Crowe injects unresolved stories of the military insulting the Hawaiian culture, a ridiculous caricature of a general by Alec Baldwin, and most inexplicably, the casting of Bill Murray as a power mad business executive using the military as a cover for his personal drive to control the world. In the middle of his romantic comedy, Crowe introduces the discomforting question of what could happen when corporations become players in space.

It becomes obvious that the writer/director tried to cram a laundry list of his unrelated concerns into one movie. If you go, enjoy watching the actors trying to keep the story on track while Cameron Crowe’s imagination is exploding around them.