A Better Future?
An Illusion Review by Joan Ellis 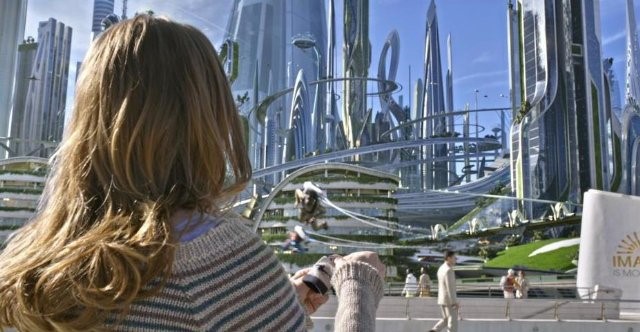 Tomorrowland is a series of sights that are inconceivable now but possible, even probable, in the future. Credit Disney with giving us their creative imaginings of sleek transportation – cars, trains, planes, and rockets streaking from point A to point B in contrast to the broken infrastructure of 2015. One of the pleasures of this movie is the repeated switching from 2015 to the future world that shows how old fashioned ours will soon seem. A family living in a house on a street with a contemporary car parked out front looks thoroughly old fashioned – almost as if 2015 should be filmed in black and white.

The movie captures us immediately by introducing young Frank Walker who is lugging a heavy backpack to the 1964 World’s Fair to enter his homemade rocket in the Inventors’ Competition. And so we are taken on a journey from 1964 to 2015 and then to the new future where most of the movie unfolds. Our guides are young Frank (Thomas Robinson), his sister Casey (Britt Robertson), and Athena (Raffey Cassidy), a hybrid from the future who can move readily between time zones.

We may have been lured to the movie by George Clooney who has fun playing the adult Frank, but whatever success Tomorrowland has will be due to the three outstanding young people. From his first on-screen moment, Thomas Robinson is an accomplished professional, comfortable, creative and as magical as the pin that transports him to the future. As his sister Casey, Britt Robertson is on-screen most of the time in both present and future. She carries a big part with enthusiasm and skill. Raffey Cassidy assumes a terrific other worldly presence as she teaches the others the customs and realities of the future. George Clooney is fine as old Frank who finally gets to test his childhood rocket invention.

The other bonus is watching the state of animation in the hands of Walt Disney Pictures. They hand the imaginings of writer/director Brad Bird and writers Damon Lindelof and Jef Jensen to the Disney creative team that conjures the future and presents it to us with all the bells and whistles it deserves. It’s my guess that if you are an adventurer, you will soar as you watch and if you are risk adverse, you may be scanning the screen for safe places to hide.

Negatives? Can you imagine the one thing that could sabotage this particular vision of the future? In one long, boring section the story dwells on the present where today’s beings resort to the only solution they have for anger. They fight and shoot and blow things up. You might take a nap when that begins, but check back in for the final scenes.

In a lovely ending, Uncle George and the three young actors deliver a positive message. They remind us that everyone who hasn’t given up on life gets to go to the future. How about that for a nice reality?