An Absorbing Winner
An Illusion Review by Joan Ellis 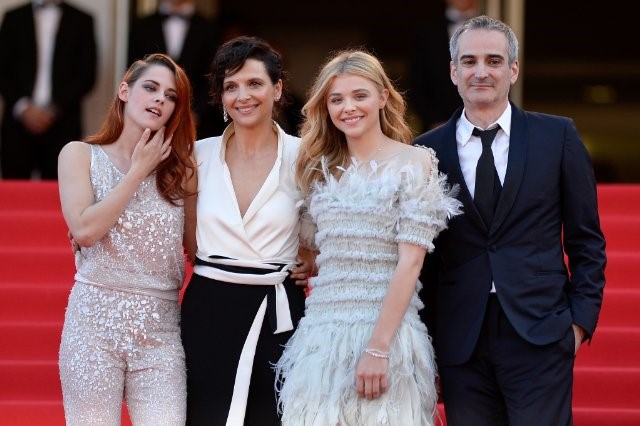 How long has it been since you’ve seen a movie that absorbed you completely? Try Clouds of Sils Maria. Olivier Assayas has written and directed a script that never once tells us what to think. Instead, he invites us to examine his explosion of verbal pyrotechnics among people who haven’t been able to navigate or understand the layers of meaning in their own lives. As they search, they are appropriately restrained but emotionally raw. Assayas has given us a story from a uniquely feminine perspective.

We meet Maria Enders (Juliette Binoche) who became a star at nineteen in the play Maloja Snake – the name of a striking twist of clouds that pass low over the town of Sils Maria nestled at the foot of Alpine peaks. She and Val, her assistant, (Kristen Stewart) are travelling by train to a gathering honoring a beloved director from Maria’s past. In a new production and with reluctance, Maria has accepted the role of the older woman playing opposite Jo Anne (Chloe Grace Moretz) who will play the role Maria played at nineteen.

These bare bones of the film are enough because this is not a movie about plot. It is primarily about the passage of time that leaves all of us in a constant state of adjustment. As we watch these characters deal with time and fame and change, director Assayas explores the subtle struggles in each of them as they are buffeted by the challenges of adjusting and accepting.

Assayas shows without explaining – the new world of celebrity management that allows Val to handle the details of Maria’s life by cell phone, the extent of Maria’s fame by the warmth of the reception when she appears before an audience.

As Val and Maria, scripts in hand, rehearse the new film throughout this one, the depth of their personal connection becomes clear. Maria, identifying still with the younger woman she once played, doesn’t realize she is rooted in another era while Val, who is reading the part of the younger woman, has been formed by an entirely different culture.

The beauty is that three things are happening at once all through the movie: the play they are rehearsing, the memory of the original play, and their actual lives in the moment – all involving age, culture, and sexual tension. None of the three is free of the others. And the lesson most of us never learn looms over it all: every single moment of life is in transit. Maria can’t grasp that.

Juliette Binoche and Kristen Stewart unleash portraits of two women ablaze, if contained. Chloe Grace Moretz, on screen for a much shorter time, is electrifying in the inspired final scene. The supporting cast is terrific.

One haunting quote is the core of the original play, of the movie, and of life itself: “The text is going to change its perspective depending on where you’re standing.” That’s one thing no one can change.