Old Guy Reinvents Himself
An Illusion Review by Joan Ellis 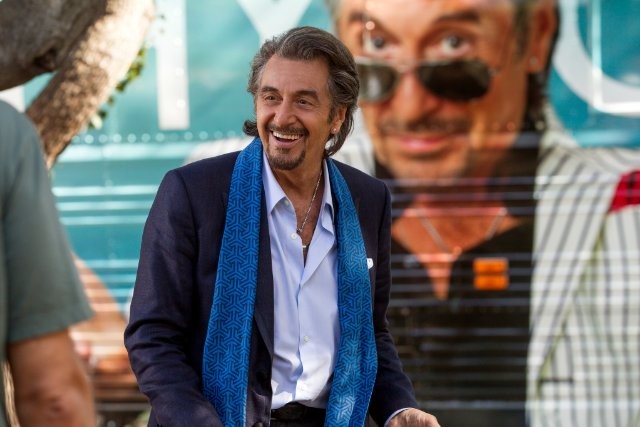 Danny Collins is a strange but ultimately rewarding movie. Given the premise of an aging rock star gone to seed, we are grateful to director Dan Fogelman for peppering the predictable sentimentality with tough twists and turns.

Danny Collins (Al Pacino) is a senior rock star in a culture that reveres youth and celebrity. As he drugs himself before each performance we learn that he has had three wives, an estranged family, and a groupie stashed in his house for his various pleasures.

On Danny’s birthday, an unexpected visitor arrives at his door. Frank Grubman (Christopher Plummer), Danny’s closest lifelong friend, has arrived with a present: a letter written to Danny by John Lennon back in 1971 in response to a letter Danny had written him. It has languished in the hands of a collector for all these years and now it becomes the trigger for Danny’s metamorphosis.

He dumps the groupie and reapproaches his son Tom (Bobby Cannavale), and Tom’s wife Samantha (Jennifer Garner). Initially Tom continues to reject his father but Danny will not give up. He simply appears and reappears quietly and unexpectedly, especially at times when Tom is in need.

Danny is now living nearby in a Hilton hotel where he meets hotel manager Mary Sinclair (Annette Bening), a bright, lovely woman who he considers “age-appropriate” even though she is a couple of decades younger. Unmoved by his celebrity, Mary stops him cold whenever his talk is ludicrous as it often is. In one of the movie’s better threads, she encourages him to write the songs he has always wanted to sing.

Danny’s professional despair is partly due to the fact that every time he takes the stage in a packed theater to sing to his adoring fans, he looks out over a sea of old faces and white hair. He’s over, and he knows it. What they want from him, and they demand it noisily, are the old hits from his early days. When he plays one of the new songs he has written, rejection sweeps through the audience.

This scene is reminiscent of Peter, Paul, and Mary when they tried to inject new songs into their concerts and suffered silent receptions. Their audiences wanted the songs they had made famous during their legendary protesting years. As they were, Danny too is a victim of past fame.

The questions that propel the movie and hold our interest are the ones that bubble up in his relationships with his family and Mary Sinclair. Watching this cast, with a special salute to Bobby Cannavale and Jennifer Garner, is a pleasure. Annette Bening is genuinely refreshing as an intelligent woman who makes the groupies look like empty jokes. Al Pacino is effective as the star whose audiences have aged and melted into the past right along with him. And Christopher Plummer. What is it about Christopher Plummer that enriches every movie he is in? Just try to look away.