A Long, Slow Erasure
An Illusion Review by Joan Ellis 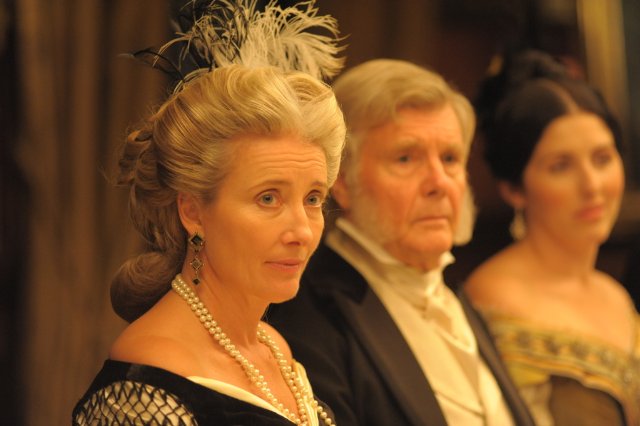 If action is your motivator, you might want to skip Effie Gray. If, on the other hand, you love a story that unfolds as a product of the culture of its time, then don’t miss it. The superb rendering of light and color by cinematographer Andrew Dunn makes the film a rich visual pleasure. Be patient; let it seep in.

We are introduced immediately to Victorian art critic John Ruskin (Greg Wise) and his very young bride Effie (Dakota Fanning). From that moment forward, we will watch the erosion of a marriage that never had a chance.

Emma Thompson’s script doesn’t explain why Ruskin chose to marry Effie. She presents him as a cold man who rejects his bride on their wedding night for reasons implied but unexplored. The six year marriage was finally annulled on that basis and Effie went on to marry John Everett Millais (Tom Sturridge), the artist who is painting Ruskin’s portrait throughout the film.

This movie is the story of those six years. Ruskin brings his bride home to a house soaked in formality where his demanding parents rule with cold cruelty. Credit actors David Suchet and Julie Walters with masterful portrayals of Ruskin’s parents – the autocrat and the mother with an unhealthy control over her son.

Effie will spend six years as a prisoner in a house that is a reflection of the darkness within it. She will stroll the grounds in heavy clothes with nothing to do, locked out by her in-laws, her husband, and a hostile staff from anything that might make her part of her new world. The joy she had known as a child of the countryside has vanished. She becomes physically sick and emotionally crippled as her natural joy is erased.

The path to an escape is suggested by Lady Eastlake (Emma Thompson), wife of the president of the Academy, who encourages Effie to rebel. Unfortunately, Thompson’s Lady Eastlake seems too contemporary, too outrageous for the culture that engulfs her. She wins our affection and admiration but also our skepticism.

How much of this grim picture is the creation of the senior Ruskins and how much the controlling demands of Victorian culture is the operative question for the audience. The twin demands of propriety and reputation infect everything.

The lingering question is Greg Wise’s portrayal of Ruskin as a constantly silent, angry husband. Since Wise is Emma Thompson’s husband in real life, we assume a cooperative collaboration. Could a man so involved in the public dialogue as Ruskin was possibly be so emotionally frozen?

John Ruskin was far more than an art critic. He engaged thoroughly in the cultural politics of his time by championing the arrival of controversial new artists. He was himself a fine watercolorist and wrote books that endure today.

When the young artist Everett Millais paints his dramatic portrait of Ruskin leaving his face, for the moment, blank, we understand our confusion. We don’t know this man at all.