Growing Older With a Smile
An Illusion Review by Joan Ellis 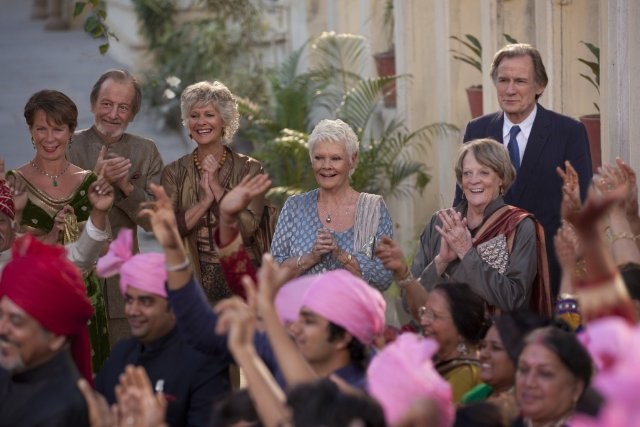 The Second Best Exotic Marigold Hotel defies criticism. It is instead an invitation to enjoy the company of a grand group of actors, and the truth is that we could be perfectly happy watching this same cast chattering about nothing over pizza. They’ve given us Part II of a gang of British citizens looking for companionship in a culture of mutual acceptance in a faraway hotel at a price they couldn’t afford at home. And what is important at this age if not acceptance?

Hotel manager Sonny (Dev Patel) has a full plate. He is juggling plans for his upcoming wedding to Sunaina (Tina Desai) with plans for expanding his now fully booked Marigold Hotel. He starts each morning with roll call – “In case somebody dies in the night.”

Mrs. Donnelly (Maggie Smith) has just returned from a business trip to America with Sonny. “How was America?” she is asked. “It made death more tempting,” she replies. It is Maggie Smith who wins spontaneous laughter from the audience by delivering scriptwriter Ol Parker’s best lines without the slightest change of expression.

Evelyn Greenslade (Judi Dench) has the confidence to accept a job from a silk manufacturer but is not quite up to entering a serious match up with Douglas Ainslie (Bill Nighy), the former civil servant who has enormous dignity but lacks the confidence to frame a proposal. Judi Dench, always performing beautifully in low gear natural, pulls us quietly into the room with her as she tries to understand who she is at this age.

There you have the core of it: Dev Patel, Maggie Smith, Judi Dench, and Bill Nighy. In a cast of dozens, these are the four who grab our attention and hold it throughout the confusion than engulfs us. Quick cut scenes, a loud soundtrack and a multitude of characters make tracking even the hotel guests a tough task. Given that reservation, the street scenes of taxis, animals, people, motorcycles and the noise they all make creates a colorful landscape of Jaipur.

Credit Celie Imre, Penelope Wilton and a host of peripheral players who do their jobs well but also lose their identities in the prevailing chaos. And then there’s the matter of Richard Gere as the American Guy Chambers, whose unexpected arrival at the front desk strains credibility as he falls all too quickly for Sonny’s mother. With his one note voice and lack of expression, he seems out of place among these graceful Brits and I just don’t believe him in the role.

Although the whole movie has a feeling of trying too hard, I fall back on my conviction that I would watch any of these people in whatever they choose to do. Watching them grow older from Part I to Part II is just fine, thank you. Perhaps in Part III they’ll teach all of us how to approach death with humor and grace. I’ll be there.