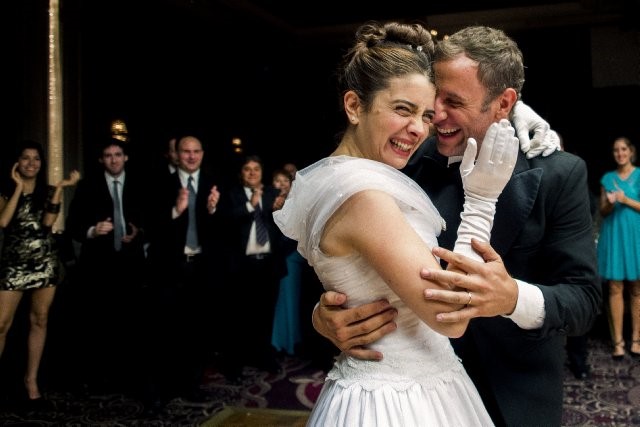 Wild Tales consistently burrows into the parts of ourselves that we try to overcome or at least subdue according to the dictates of civilized behavior. With outrageous humor, this movie deals with the impulses and temptations we feel when we are furious at someone. When it happens, we tuck it away and indulge ourselves in some sort of socially acceptable revenge – a nasty bit of gossip, or unfurling a verbal blast. Writer/director Damian Szifron and producer Pedro Almovodar will have none of that. In six episodes rooted in some sort of an inflicted injustice, their victims refuse to be civilized. When vengeance burrows into their souls, they retaliate with action far outside the rules of society.

In “Pasternak”, the wildly imaginative opener, two people on board an airliner discover a mutual connection that leads to big time trouble. In “The Rats,” a waitress in a diner meets the man who drove her father to suicide. The cook in the kitchen becomes her advisor. “In Road to Hell,” an ego driven businessman in his fancy new car shouts an insult as he passes a rough looking guy in a beat-up vehicle. When man #1 suffers a flat tire and man #2 pulls up, the stage is set for fireworks.

In “Bombita” a demolition expert has to navigate the red tape of retrieving his impounded car and then face his wife who is furious because he has missed his daughter’s birthday party. Can you guess the form his revenge will take?

“Till Death Do Us Part” unfolds as the bride discovers her groom has been involved in an affair with one of the guests. Wonderful pandemonium ensues. .

“The Bill” is an unfunny comment on money and privilege. A father accustomed to making demands of people who do his bidding is covering for his son who ran down a pregnant woman. This tonal clash adds nothing to the film.

If you are less than excited at this point, just trust me please. I have sketched only the incidents that provoked the rage. Believe me when I say that the people who have been wronged come up with wickedly inventive ways to avenge themselves, and in all but one case, the lunatic energy of the vengeance will make you laugh in appreciation.

The fun of all this lies in the truth that we’ve all been provoked to anger but usually we manage, in keeping with the dictates of our culture, to stifle and stuff it. Here you can revel in the delight of people who simply can’t resist action. This is what might happen when a victim of a particular injustice is just too angry to listen to that civilized dictum that always says “Move on.”

Messrs. Almodovar and Szifron have contrived outsized insults and then solved the inevitable confrontation with a twisted vengeance laced with dark humor. They have, in other words, taken a look at human nature unleashed for just a moment.