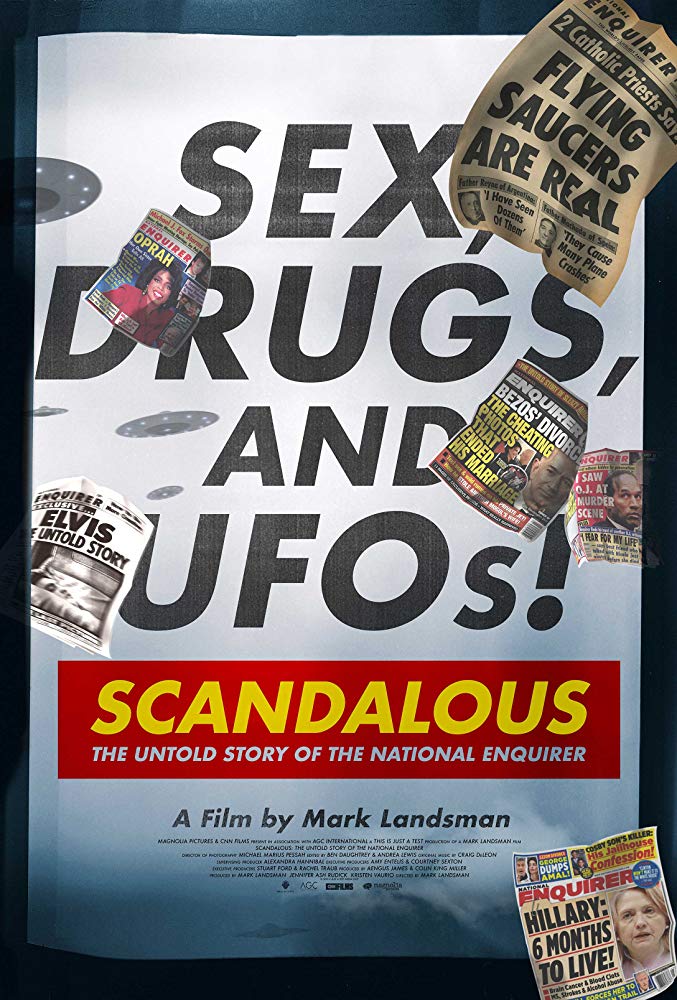 Consider the studio’s promotion sentence about Scandalous: The True Story of the National Enquirer: “Scandalous is the true story of the National Enquirer, the infamous tabloid with a prescient grasp of its readers’ darkest curiosities.” If that sentence repels you, go no farther but for me it was an interesting look at a newspaper I never read because I thought gossip was ugly. This documentary tells us about the newspaper and the many subjects of their published scandals.

At sixteen, Gene Pope wanted to take over his father’s paper that back then concentrated on gore and sold to 1,000,000 people. As the suburbs sprawled in the ‘60s, Pope put his paper in supermarkets and changed its emphasis from violence to gossip on his theory that real world news is boring or harsh.

The now rich boss sent his reporters around the world – first class all the way, but they were competitive and often cruel to each other. Competition ruled in the form of Friday night parties where Pope fired people who had failed in any way. Employees were sent to talk to families, lawyers, hair dressers, or anyone who might give them gossip leads. They paid for information with cash and betrayed each other in the process of getting scoops.

Some of the hot scandals that enabled the explosive growth: Bob Hope having affairs with stars and “everyone else.” When Elvis died, the paper went to Memphis and turned a whole hotel into a newspaper office. Ordered from on high to get a picture of Elvis in his coffin, they connived and bribed and got the picture that sold 6.9 million copies of the paper. Their sales eclipsed Time and Newsweek.

Bill Cosby, “America’s dad”, was another. After politics became celebrity, Gary Hart lost his shot at the presidency because of the paper’s $87,000 picture of him and his girlfriend. Back then, a young Donald Trump was photographed with his girlfriend, Marla Maples. The film says Trump repeatedly called in gossip about himself while pretending he was someone else.

O.J. Simpson, former football star, was a big catch. His ex-wife was murdered. Did he do it? The coverage was deep, including the discovery and use of his shoe sole patterns to prove he had been on the murder scene. After Princess Di’s death in an auto crash, a dignified George Clooney savaged the newspaper in a TV speech – “What are they doing to these people?”

The widespread gut reaction may be disgust with the paper but after their stories began to spread to the mainstream press, the scandals became regular news that people weren’t ashamed to read. The lingering feeling for me after watching all this was, yes, disgust, but also a deep wondering of why people who have won public acclaim with their talents can’t begin to realize they have something to live up to. They have realized their gifts. Imagine an entertainment world where celebrities respect their public and the public respects their privacy. It won’t happen.