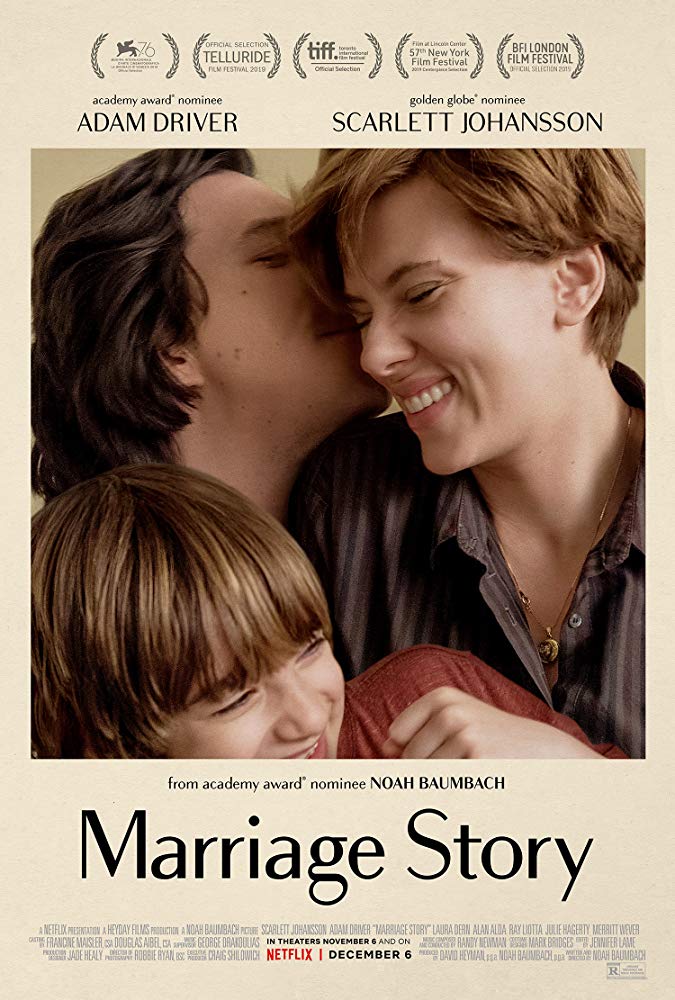 Marriage Story opens beautifully as a husband and wife describe each other and the path of their marriage from day one to now. As each finishes the personal tale, we have become happy captives in their problems. The rest of the story expands our knowledge of this marriage based on that fine beginning. We have been warned there will be a divorce but have no idea where that will lead.

It’s common knowledge now that the conventional long marriage between two individuals – each different from the other – can be a big problem confirmed by divorce statistics. Within minutes we know that Charlie (Adam Driver) and Nicole (Scarlett Johansson) have loved each other, love their son Henry (Azhy Robertson), and that she is coming unglued over her frustrations in the marriage. It is a welcome relief to watch it unfold without the usual Hollywood anger. This couple does not want to detest each other.

Then the lawyers come. Must lawyers always push their clients to extremes just to bolster their side of the case? Must they always be rooted in building a nasty case instead of a discussion? Nicole is an actor in California, Charlie a director in New York. He wants her there by his side, she wants to establish herself in Hollywood. Both love their son; each respects the other.

As things disintegrate, they both cherish their time with the son each of them loves so much. A haunting sentence from Nicole: “The kids – once they leave your body, they just continue going away.” We are watching a grandmother, lawyers, and shrinks who rough everything up but we never lose our affection for Nicole and Charlie. We root not so much for their marriage because we understand why it’s over, but for their deep appreciation for the decency of the other. Have the lawyers managed to shred that along with the marriage?

The audience is caught and is rooting for each. That rare situation is due to writer/director Noah Baumbach who paints the differing atmospheres of Hollywood and New York along with the essential decency of his players. Randy Newman’s score is quietly supportive rather than dominant or melodramatic. Even grief and defiance are delivered calmly and in small detail.

Every actor here seems to understand director Noah Baumbach’s determination to avoid a melodramatic divorce drama. This one unfolds with fine acting by the whole cast as the audience roots for both of them. Scarlett Johansson and Azhy Robertson, as mother and son, are quietly and consistently good which allows us to become thoroughly drawn to the gradual collapse of Adam Driver’s Charlie. His long and very deep performance captures all of us.

Watch the skillful unfolding of the small physical details that flesh out the characters and carry the story, and prepare for the finest surprise gesture that ends this movie. This is a quiet story not of a divorce war but of an unfortunate but inevitable separation.