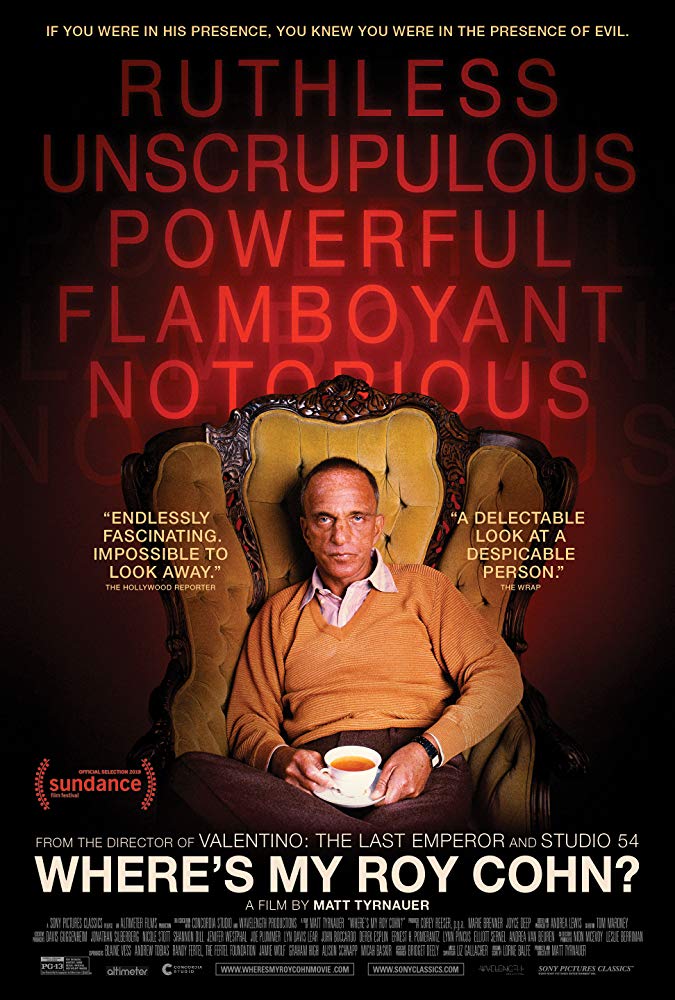 Ask young people if they plan to see Where’s My Roy Cohn? and you’ll receive silence and a blank stare. Who? The young should see it because of its deep contemporary relevance. If you are over 70, this strong documentary will fill in the gaps of a story you probably knew well years ago. All age groups should be interested in Cohn’s connection with the current occupant of the White House.

In the ‘50s, Roy Cohn was known as a smart, ruthless young lawyer. His quote: “I don’t care what the law is; I care who the judge is.” At the peak of the Cold War he was prosecutor and designer of the guilty verdict in collusion with a corrupt judge in the trial of Julius and Ethel Rosenberg that ended in their executions.

A small interruption: In 1952 while working in Washington, I walked to the capitol to the committee meetings where I watched a young Roy Cohn as he worked in Senator Joseph McCarthy’s hearings. At 21, I sat in that room and felt disgust for both Cohn and McCarthy as they manipulated the truth while destroying their victims. Their dishonor was deep and obvious.

We see films now that were taken of all this back then, but before common television coverage, the films didn’t reach large audiences. Then, and even now, we still underestimate the power of television as the tool that can deliver truth that is so readily seen in closeup coverage. Senator Joseph McCarthy was exposed in that hearing when Joseph Welsh unleashed his famous stab in a dignified, quiet voice as he stared at the senator: “Have you no sense of decency, Sir?”

This documentary shows the decades of phony manipulation as Roy Cohn destroyed whoever happened to be his target of the moment. He marched through all this with unshakable confidence as he accumulated fame and power while destroying innocent people. After hours he hung out as a rich, tan regular at the Stork Club and in his two Rolls Royces.

After his mother died, he surrounded himself openly with the friends who provided him with everyday sex, alcohol, nightclubs and mobsters. At some point, Cohn met the young real estate businessman, Donald Trump, and became his coach. By 1983 he stood at the opening of New York’s Trump Tower built by two hundred illegal aliens who were never paid.

Roy Cohn, who stole from his own clients, was ultimately disbarred in a wave of fraud, dishonesty and deceit. This man who inflicted so much harm on so many people went to his grave still lying to the public on the front pages of the press. This documentary proof of his guilt in all parts of his life is supported by genuine published photos and quotes from his time. It is a carefully assembled exposure of a criminal who made his living by hurting people. No appeal for you? It’s an important piece of history. Please go.