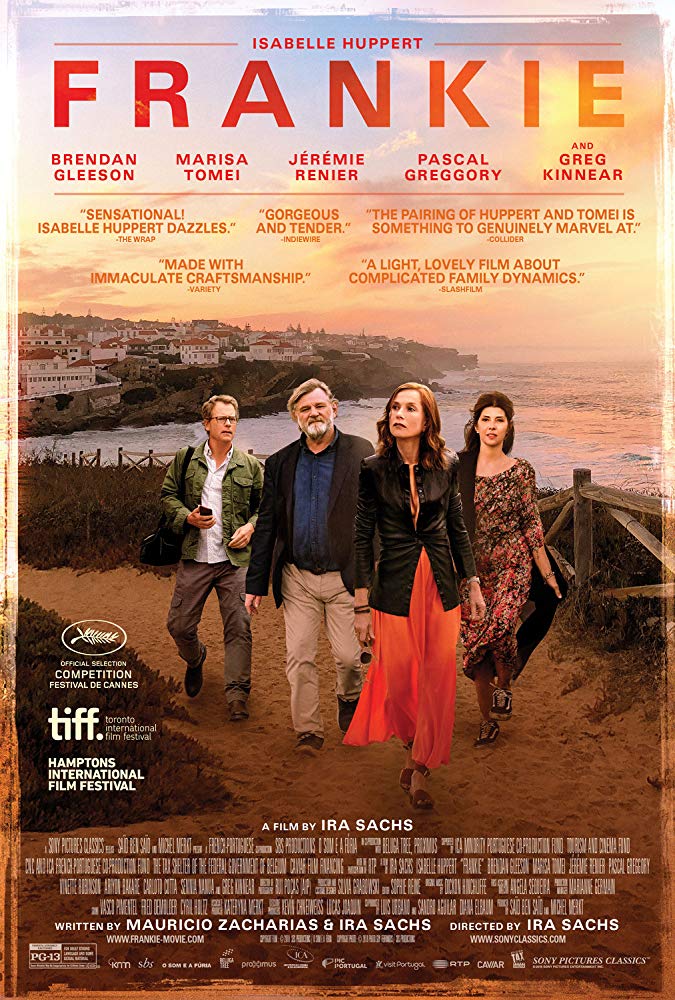 Please don’t skip Frankie, and be sure to go when you feel peaceful enough to see a quiet and lovely movie. If you let it in, it’s likely to stay with you for a long while. Don’t look for a plot that unfolds in detail, and don’t think it’s dull because it unfolds gradually without driving you toward specific characters. So why is it so good?

The story was filmed in Sintra, Portugal where movie star Frankie (Isabelle Huppert) has gathered three generations of her family for a reunion. She has reasons of her own for doing it and keeps those closely inside herself. The family gathers in one of the most beautiful places anywhere on this earth and writer/director Ira Sachs resists any temptation to throw them all into a conventional plot. Instead we watch them interact quietly with few words as they explore the overwhelming beauty that surrounds them. They wander alone or in varying pairs through the hotel, the gardens, and the mountaintop. They are quiet, and we are drawn in.

Consider some of the quiet people. Frankie’s first husband, Jimmy is played with quiet caring by Brendan Gleeson. Her daughter is an explorer who ends up swimming in the ocean with a nice boy from her bus ride. We meet Ilene (Marisa Tomei), Gary (Greg Kinnear) and a handful of others. We listen to short, quiet exchanges before understanding that the enormity of the beauty of the surroundings has dropped them gently into silence. Do they appreciate the beauty so deeply because most of them are in the movie business?

As we follow their wanderings through the beauty, we in the audience become one of them. We don’t need to decipher the plot because we have become fellow travelers on their journey. As it all unfolds, we learn about Frankie’s reasons for the gathering and recognize why she chose Sintra. The gathering is silenced by beauty. Everything around them – weather, forest, ocean, stone mountains is an exaggerated symbol of beauty and no one violates the quiet.

If you, as I did, begin to wish you heard more that would reveal the characters, instead just watch the family silenced by the beauty of where the matriarch has brought them. You will hear short, meaningful conversations against the backdrop of scenery most of us have never seen. No one in the film or the theater remains unaffected.

If silence and beauty are the core, the conversations flow gently even when disappointment lies beneath. Anything else would have violated the achievement. You will hear no clichés. Everything is deeper than that. We know that everyone has depth, that no one is dull. Their depth is conveyed through acting on the best of levels. The beauty has reached every one of them. Each is different from the others, even in silence, and we feel the depth of the relationships and the power of the beauty as it hits them. In near silence, these people make deep connections.