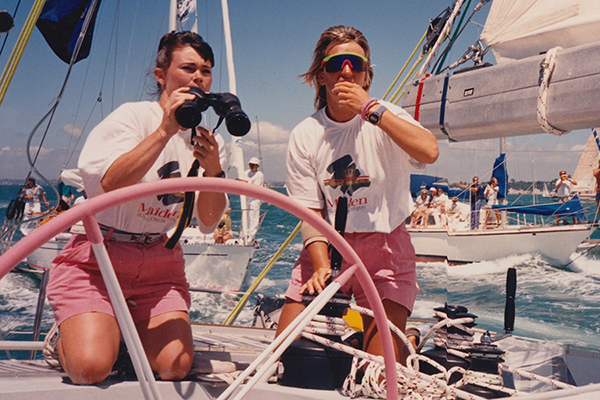 It is easy to tell you that “Maiden” is about the first all-woman crew in the in the round-the-world sailing race. It’s far harder to convey the astonishing quality of this documentary on all its many levels. Just go. The ingredients are overwhelming and they are assembled with masterful skill by director Alex Holmes who grabs us right away and never lets us go.

The opener: “The ocean’s always trying to kill you. It doesn’t take a break.” Tracey Edwards signs on for the only possible job she could win back then: cook. She does a good job of keeping the male crew healthy and happy. She’s a maid who is learning about racing.

Then her turn comes. She assembles nine dedicated, experienced women as crew for her dream race. No one will lend money to this crew in 1987. Mortgaging houses and taking loans, they buy a damaged old boat and spend a year scraping and repairing it while anyone hearing their plans just laughs. They are referred to by men as “a tin full of tarts.”

After more than three years of work, they set sail in September of 1989 with the crew still lacking confidence in their captain and suffering the laughter of anyone who knows what they are doing. First leg: Uruguay. “The land disappears and then it’s just you,” Edwards says and that stays with the theater audience that is now emotionally on board. To the astonishment of male crews, they arrive in Uruguay in third place. The questions they asked of themselves in the planning are different from those that float among men.

Our respect deepens as we see the icebergs and 20-degree wind chills in their path. When this skilled crew wins the first leg after 76 tough days at sea, men called it “a lucky leg.” During their 167 days at sea, they hit rough water they describe as “hitting a brick wall without your seatbelt on.” When the boat leaks, they fix it. Every unexpected danger brings new strength. And when it’s over they and the welcoming crowd in Southampton begin to understand what they’ve done by meeting and beating the unexpected demands of racing at sea for 167 days.

At movie’s end, the theater is silent for a moment before it erupts in applause. The whole film captures both the force and danger of nature and the strength and determination of these women who tackled a challenge the whole world thought they couldn’t meet. As if that isn’t enough, imagine the job of fitting together the film slices of the race, the storms and the problems that faced them every day.

The windup of this grand documentary shows us what happened when the world finally understood what these women did. They have risen beyond any possibility thought to exist for them in the 1980s, and their story is a knockout. Alex Holmes’s film is a stunning tribute to them and a grand experience for us.