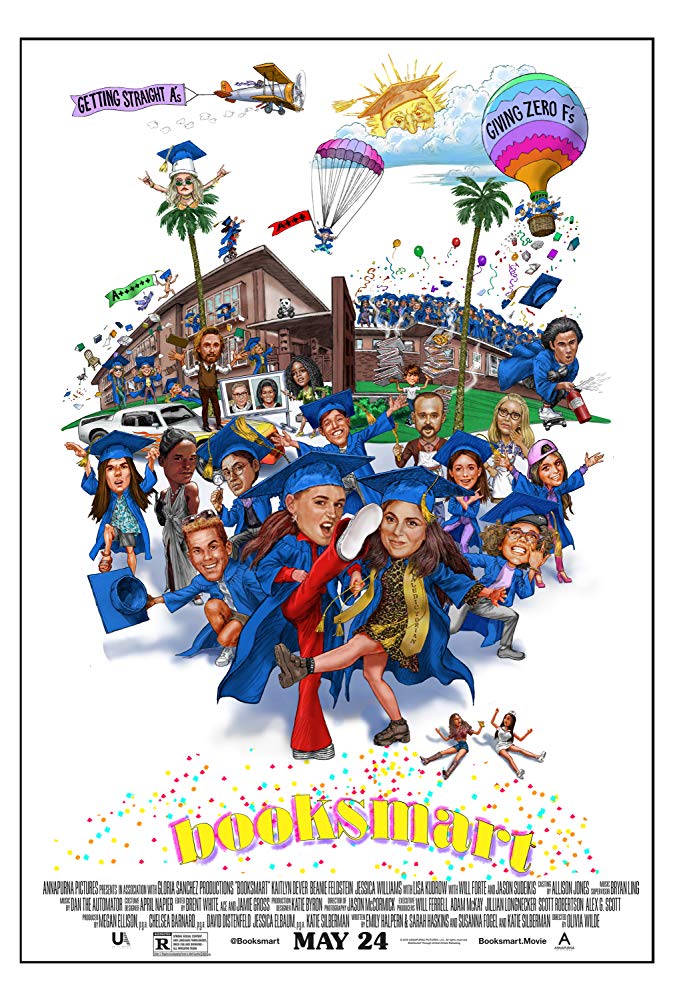 Have you gone to the movies lately? Looking for a good new one to review is tough. So off I went to Booksmart because it had some positive reactions. For me, it was a perfectly awful movie. Okay, remind me that it’s for teenagers, but do teenagers really like it?

The premise is good. A party is coming up on the night before the high school graduation. Two smart, successful students who are heading for Yale agree they have been overly studious and want to cut loose for once. As they roam this evening with the supportive chemistry of their friendship, we watch through their eyes the unfolding of alcohol fueled idiocy.

The cast is capable. Kaitlyn Deever and Beanie Feldstein try their hardest as the two girls; Lisa Kudrow and Will Forte have the only sane scene in the movie. Jason Sedeikis is forced to play a fool. They become caricatures. To be fair, I must add that the movie has received good to excellent ratings from reputable sources. Maybe you should talk to others before you listen to me.

One other problem surfaced on that grim evening. A stultifying series of previews of coming attractions announced this summer’s menu for young people. Without exception, every one of these was violent in a way that just a few years ago would have been impossible to produce. The availability of the new world of sound and filming techniques has handed moviemakers the tools for terrifying audiences of all ages. “Violent” is far too mild a word for the previews I saw. Let’s try “terrifying.”

Though it is too soon to gauge the effect of this violence on young audiences, one thing is certain. Hollywood has made terror acceptable and is delivering it in sight and sound that rocks any movie theater. It felt like a series of announcements to viewers that violence is the world’s moving force, that every day occasions are cinematic sets for brutal physical acts. Is it okay to chop people’s heads and limbs off? To torture with frightening instruments? To suggest nightmarish probabilities? All this unfolds to horrendous noise. While not a graphic encouragement to audiences to commit violence, there is a strong factor there that is conditioning us not to be shocked by it.

What this new flood of fierce imagery does is to condition young minds to see brutality as adventure, and isn’t that already a problem in our country? We have guards in schools and police on the streets because of the new surge of shooting rampages and crashes. It’s happening.

These previews that I saw were followed immediately by that feature movie made for teenagers. Get a grip, Hollywood. Violence isn’t the only use for your new movie tools. Think about the fun of using them to flood our imaginations with some positive imagery that those tools have enabled. Imagine the fun of creating the excitement of stories about rescue and mystery and adventure. Please.