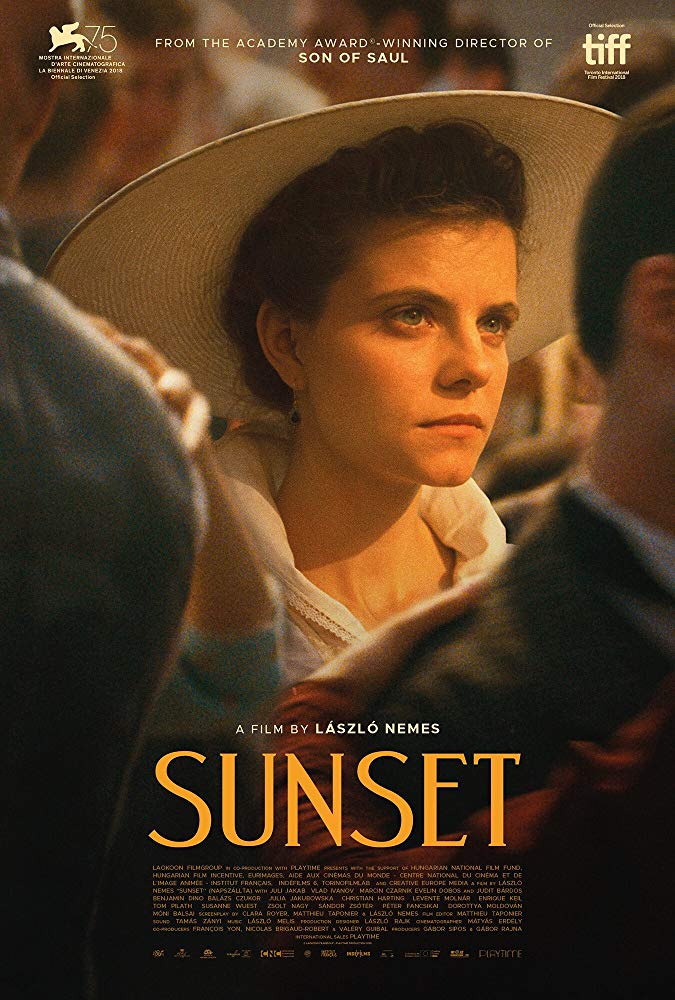 Here’s a challenge to all movie lovers. Sunset delivers pre-war Budapest in 1910 with such creative filming that it’s hard to look away even for a moment. The flip side of that pleasure is that we never understand what has just happened or what is likely to happen next. For an hour or so I assumed the complex introductory scenes would be explained. That never happens.

The movie opens on Irisz Leiter (Juli Jakab) a lovely woman of expressionless dignity as she tries on elegant hats in the building that had once been her parents’ hat factory. Irisz wants to work there. Why? No answer to that one.

We learn that her parents died in the fire that destroyed the building years ago and when a man attacks her, he yells about her terrible brother. Her brother? She hadn’t known she had one.

Irisz leads us through the film as she searches for her brother in whatever family connections she can find. The party thrown to acknowledge the 30-year anniversary of the fire is but one of the many parties she visits in this world about to go to war. Whenever she asks questions about the whereabouts of her brother, she gets no explanation, just some deadly version of “Get out of here, he’s a maniac.”

No one befriends her; no one explains what her brother has done. The Leiter family name is synonomous with evil. Why then is the fire being celebrated? We never know. We follow her everywhere as if tied to her shoulder – until we tire of never getting answers.

Irisz is alone in a world that is against her without telling her why. Why aren’t we told why her brother is a savage? As much as we want to sympathize with her, even that is hard because she is so silent that we don’t warm to her. So we follow her in her search for her brother and her family history as she moves through scenes without explanations or enlightenment.

Suddenly we are in the trenches of World War I. Why? What exactly is the connection between her search for family and the oncoming war? We don’t know.

A movie this hard to follow would normally have driven us out of the theater but the sight and sound of all of it held the audience in their seats. For some unknown reason, Director Laszlo Nemes placed a woman’s search for her family history in pre-war Budapest. After he tires of her search, he films the trenches of the oncoming war. Perhaps this filmmaker was simply driven to reconstruct pre-war and watime Budapest.

Though none of it makes any sense as a story, Director Nemes is an artist at painting his scenes, so much so that no one leaves the theater. Though I can’t possibly recommend it, the final word here is that those beautifully filmed scenes still float through my head with an odd regularity.